3rd International Symposium on the Law of the Sea 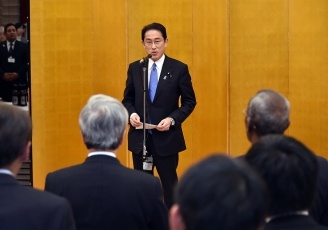 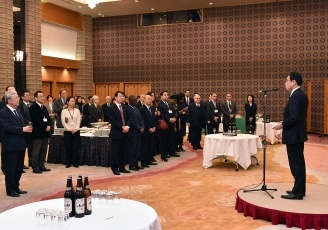 1 On Thursday, February 2, and on Friday, February 3, the Ministry of Foreign Affairs of Japan hosted the 3rd international symposium on the law of the sea "20 Years of Development of the Law of the Sea and Emerging Challenges" in Tokyo (at Mita Kaigisho Auditorium).

2 Experts in the field of the law of the sea from home and abroad participated in the symposium as panelists. About 300 participants, including the representatives of diplomatic missions, officials of the Government of Japan, academics and students, had active discussions with the panelists.

3 At the end of the first day of the symposium, Mr. Fumio KISHIDA, Minister for Foreign Affairs of Japan, hosted a reception and made a speech in which he stated that the law of the sea has achieved significant development over the past 20 years after the entry into force of the United Nations Convention on the Law of the Sea (UNCLOS) while new challenges have emerged, and pointed out the need to tackle the challenges. In this regard, Mr. Kishida expressed that Japan is committed to engaging such efforts and contributing to further development of the law of the sea.

4 (1) In the opening session held on February 2, Mr. Nobuo KISHI, State Minister for Foreign Affairs of Japan, delivered the opening remarks in which he pointed out that number of conflicts over securing the resources or security has increased in the recent years, particularly in Asia, and it has become more important for the entire international community to maintain maritime order governed by law and rules. Mr. Kishi also referred to the initiative such as "Three Principles of the Rule of Law at Sea" advocated by Prime Minister Abe in 2014, at Shangri-La Dialogue, and stated that Japan complies with the international law including UNCLOS and takes concrete actions based on it.

(2) Following Mr. Kishi's remarks, Judge Vladimir V. GOLITSYN, President of International Tribunal for the Law of the Sea (ITLOS), made a keynote speech, in which he made an overall introduction and assessment of the development of the law of the sea under UNCLOS which entered into force more than 20 years ago and the challenges it faces today.

5 In the panel discussions, the panelists made their reports on the three themes below, followed by the Q&A sessions with the audience.

(1) Segment 1: Development of the Law of the Sea under UNCLOS
Judge Shunji YANAI, Judge and Former President of ITLOS, Tullio TREVES, Emeritus Professor, Faculty of Law, University of Milan and Former Judge of ITLOS, Tetsuro URABE, Member of the Commission on the Limits of the Continental Shelf (CLCS), reported on the assessment of the past activities and challenges faced by ITLOS and the CLCS which are organs established by UNCLOS.

6 Based on the experience of this symposium, the Ministry of Foreign Affairs will continue to provide host fora to discuss matters related to the law of the sea to further   enhance the rule of law at sea.