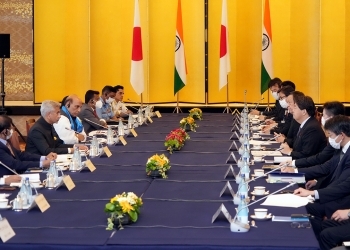 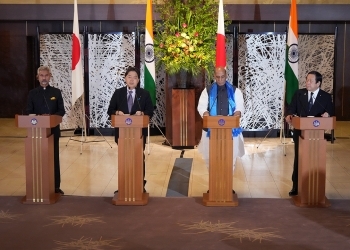 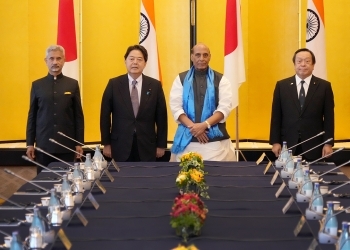 On September 8, commencing at 3:00 p.m., Mr. HAYASHI Yoshimasa, Minister for Foreign Affairs of Japan, and Mr. HAMADA Yasukazu, Minister of Defense of Japan, held a Japan-India 2+2 Foreign and Defence Ministerial Meeting with H.E. Dr. S. Jaishankar, Minister of External Affairs of India, and H.E. Mr. Rajnath Singh, Minister of Defence of India, for approximately two hours in an in-person format in Tokyo. The Joint Statement (English(PDF)

) was issued after the meeting. The overview of the meeting is as follows.

The Ministers welcomed the holding of the second Japan-India 2+2 Foreign and Defence Ministerial Meeting this year, the 70th Anniversary of the Establishment of Diplomatic Relations between Japan and India, following Prime Minister KISHIDA Fumio’s visit to India in March and Prime Minister Narenda Modi’s visit to Japan in May. The Ministers discussed the regional and global affairs, bilateral security and defence cooperation, and coordination among like-minded countries, bearing in mind Prime Minister Modi’s possible future visit to Japan as part of the annual mutual visit by the leaders. In view of their respective presidencies of the G7 and G20 next year, they confirmed that both countries will work closely to lead the international community.

2. Cooperation in the Indo-Pacific Region

The Ministers exchanged views on regional issues, including the situation in Ukraine, East and South China Seas, North Korea, and South Asia.