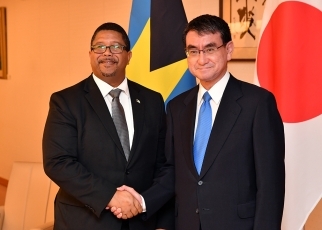 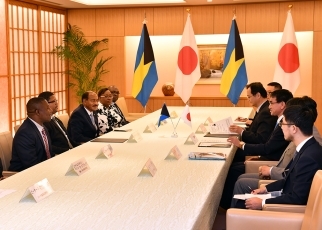 On November 12, commencing at 5:35 p.m. for approximately 15 minutes, Mr. Taro Kono, Minister for Foreign Affairs of Japan, held a meeting with Hon. Kevin Peter Turnquest, Deputy Prime Minister and Minister of Finance of the Commonwealth of The Bahamas, who is visiting Japan. The overview of the meeting is as follows.

[Reference] CARICOM (The Caribbean Community)
(1)CARICOM was established in 1973 based on the Chagaramas Agreement (this year marks the 45th anniversary). The Secretariat is located in Guyana.
(2)CARICOM is a regional organization with the objectives of advancing regional economic integration, enhancing coordination of foreign policies, and encouraging cooperation in areas such as health and medical care and education.
(3)Member states are the following 14 countries and 1 region: Antigua and Barbuda, The Bahamas, Barbados, Belize, Dominica, Grenada, Guyana, Haiti, Jamaica, Saint Christopher and Nevis, Saint Lucia, Saint Vincent and the Grenadines, Suriname, Trinidad and Tobago, and Montserrat (British overseas territory)