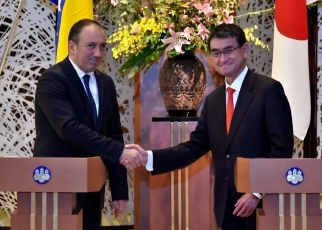 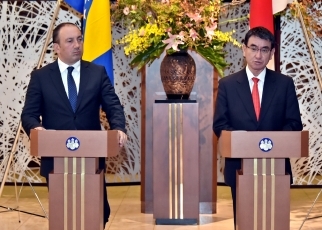 On October 31, commencing at 7:50 p.m. for approximately 60 minutes, Mr. Taro Kono, Minister for Foreign Affairs, held a Foreign Ministers’ Meeting over dinner with H.E. Mr. Igor Crnadak, Minister of Foreign Affairs of Bosnia and Herzegovina. The overview of the meeting is as follows.

Minister Kono mentioned the economic potential of Bosnia and Herzegovina and stated that Japan hopes to further advance bilateral relations in both political and economic fields. He also announced that the Government of Japan has decided to introduce visa exemption for diplomatic and official passport holders of Bosnia and Herzegovina to promote exchange between government officials for enhancing the bilateral cooperation.

Minister Kono explained that it is necessary to strengthen the pressure on North Korea to the maximum extent by all means, including the full implementation of the relevant United Nations Security Council resolutions, and to make North Korea change its policy. The two Ministers also exchanged views on the situation in the Western Balkans. In addition, the two Ministers agreed that Japan and Bosnia and Herzegovina will work closely together to deal with various challenges which the international community faces.