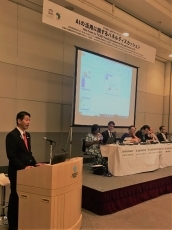 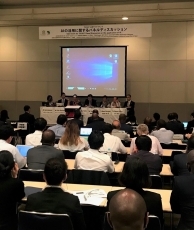 On 29 August, as an official side event for The Seventh Tokyo International Conference for African Development (TICAD7), Ministry of Foreign Affairs of Japan and UNESCO co-hosted a panel discussion on African AI prospects and challenges as well as UNESCO’s role on AI.
AI Experts from Africa, Japan and UNESCO joined the event as panelists, while scholars, intellectuals, people from various organizations and Ambassadors from African countries attended the event as audience.
Mr. Kenji Yamada, Parliamentary Vice-Minister for Foreign Affairs, attended and gave an opening remark along with Mr. Firmin Matoko, Assistant Director-General for African and External Relations of UNESCO.
Mr. Yamada’s speech summary is as follows:

1. Making advancement of AI technology compatible with citizen’s safe and secure use of it is important. To that end, Japan adopted AI Principles at the Osaka G20 Summit in June, which aims at a “human-centerd“ approach to development (PDF)

. Furthermore, Japan has proactively been contributing to UNESCO’s efforts in formulating ethics of AI.

2. There are a variety of efforts among industry, government and academia to look into potentials of how AI can contribute to improving quality of people’s lives, in particular utilizing AI in the area of disaster risk reduction in Japan where there are a lot of disasters. Since Africa is also suffering from water disasters, there are thought to be such potential needs.

3. Japan will contribute to AI application and capacity-building in Africa, through close cooperation with UNESCO.