Thursday May 19th, at the United Nations University 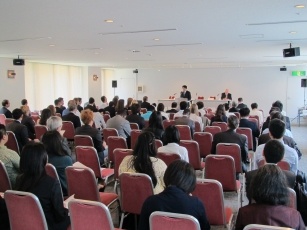 The G7 Summit brings together the leaders of the G7, a group of countries that share the fundamental values of freedom, democracy, the rule of law, and human rights at a single table to exchange frank opinions on a variety of issues confronting the international community. It is a forum that makes proposals to the world on specific solutions in the form of Summit Declarations. Much of this initiative follows the same path that the United Nations has over the past 70 years.

As one concrete action, today, I would like to review the message that Japan hopes to send regarding various issues facing the international community while leading the G7 nations as the country holding the Presidency at the G7 Ise-Shima Summit.

The Summit started in 1975 as a meeting of developed countries faced with the Nixon Shock, the First Oil Crisis, and other challenges based on a view that it was necessary to have a forum for comprehensive discussion of policy coordination regarding global economic issues among top leaders.
Global economic conditions are likely to be one of the primary themes once again at this year’s G7 Summit amid major fluctuations in global markets and increased uncertainty in the global economy since the start of the year against a backdrop of concern about slower economic activity in China and falling crude-oil prices.

Now is the time for the G7 to work together and exercise leadership in presenting a vision and measures for global economic growth in order to realize sustainable and robust growth by the global economy. As the country holding the G7 Presidency, Japan hopes to engage in thorough discussion with leaders from the various countries and send a clear message aimed at revitalizing the global economy that combines monetary policy, accelerated structural reforms, and dynamic fiscal actions in a well-balanced and collaborative manner. It also expects discussions from the standpoint of fair economic management by addressing tax evasion, anti-corruption measures, as well as unfair dumping and the closely related issue of excess production.

Global stability and prosperity, which benefit us, are outcomes of the order founded on the fundamental values of freedom, democracy, the rule of law, and human rights enabled by the G7 countries and the United Nations. However, this international order is facing challenges from unilateral efforts to change the status quo.

Terrorism and violent extremism are the primary examples.
The United Nations and G7 nations have adopted various counter-terrorism initiatives by passing multiple Security Council resolutions and Summit Declarations and carrying through follow-up actions.
Dealing with terrorism in Syria and other areas, as well as refugee issues, requires short-term initiatives, such as border-level measures and emergency humanitarian assistance, as well as longer-term efforts to grapple with underlying causes and active assistance in support of building generous, stable societies that do not foster violent extremism not only in the Middle East, but throughout the world. From this perspective, Japan hopes to engage in sufficient discussion of issues in the Middle East, particularly in light of results from the G7 Hiroshima Foreign Ministers’ Meeting, and prepare a G7 Counterterrorism Action Plan with detailed measures that the G7 nations think are useful areas for their efforts at the G7 Ise-Shima Summit.

Additionally, in the maritime area, behavior is occurring that undermines the global order based on the rule of law, including the escalation of unilateral attempts to change the status quo that raise tensions. Japan also aims to confirm the resolve of the G7 countries to work closely with the international community to protect open, free, and peaceful oceans based on the G7 Foreign Ministers’ Statement on Maritime Security, which was adopted at the Foreign Ministers’ Meeting, at the Ise-Shima Summit.

Japan also intends to conduct frank discussions among the G7 leaders regarding climate change and energy as well as conditions in the Asia-Pacific region as the first Summit being held in Asia in eight years.

Japan will seek to bring attention to areas that it has led, such as creating “a society in which women shine,” quality infrastructure investment, and health, at the Ise-Shima Summit and take the initiative in driving global efforts.
These issues are truly core components of the 2030 Agenda for Sustainable Development adopted in 2015, the 70th year of the United Nations’ establishment.
I would like to take this occasion to briefly explain Japan’s thoughts on these issues.

The first is high-quality growth.
Supply is currently trailing demand for infrastructure investments worldwide, and it is estimated that the gap amounts to one trillion dollars a year. It is essential to deal with this issue from a longer-term, qualitative standpoint, rather than just short-term actions and quantity. Japan has promoted “quality infrastructure investment” from this perspective over many years in Asia and globally.

In particular, Asia is the world’s growth center for the 21st century, and devising a proper response to this massive infrastructure demand is an extremely important issue.

While high-quality infrastructure might appear more expensive at first, it ends up being cheaper over the long term due to ease of utilization, longer usage, environmentally friendly features, and preparedness for disasters. By conducting infrastructure investments in light of these points, Japan has sufficiently grasped the needs of its counterpart countries and also created jobs, boosted skills, and improved living standards for local people.

At the Ise-Shima Summit, Japan intends to focus on quality infrastructure investments that it has led and take the initiative in advancing global activities. Specifically, it intends to explain the importance of implementing quality infrastructure investments in a manner that contributes to sustainable growth to the international community and discuss the types of contributions that are possible as the G7.

Japan has placed emphasis on health too.
The Kyushu-Okinawa Summit in 2000, where the fight against infectious diseases was a major agenda item, led to the establishment of the Global Fund to Fight AIDS, Tuberculosis and Malaria two years later. In addition, at the 2008 Hokkaido-Toyako Summit, the G7 countries agreed upon comprehensive measures for strengthening health systems, including measures against infectious diseases and strengthening maternal and newborn health.

At the G7 Ise-Shima Summit, based on these past results, leaders will consider issues including 1) strengthening the response to public health emergencies, by taking into account the lessons learned from previous outbreaks, such as Ebola, 2) assisting health system strengthening in developing countries and ensuring the provision of basic health services for all people throughout their lifetime from maternal and newborn health to aging, towards achieving universal health coverage (UHC), and 3) addressing the antimicrobial resistance (AMR) issue that remains an ongoing topic from the Schloss Elmau Summit.

On gender issues, Japan is promoting various efforts aimed at creating a “world in which women shine.”
As part of this initiative, Japan has been hosting the World Assembly for Women (WAW!) since 2014, inviting a wide range of international leaders to join comprehensive discussions on issues surrounding women. This year’s meeting will be the third year, and Japan aims to enhance this initiative as a leading forum for global discussion of active engagement of women in society.

At the G7 Ise-Shima Summit, Japan hopes to promote discussion of issues related to the active engagement of women and boosting global sentiment for addressing this issue in all fields. Specifically, building on the progress made at the Schloss Elmau Summit, it plans to address 1) empowerment of women and 2) promotion of greater involvement by women in natural sciences and technology.

The G7 Ise-Shima Summit will be the first Summit held since the adoption of the 2030 Agenda. I would like to end by stating Japan’s resolve to contribute to initiatives by the United Nations, including implementation of the 2030 Agenda, by promoting these discussions among the G7 countries.

9 Visit by President Obama to Hiroshima

I would like to make a final point about the visit by President Obama to Hiroshima after the Ise-Shima Summit finishes. The Government of Japan thinks this event offers a very important historical opportunity to pray for all of the victims and to revitalize international sentiment for realizing a world without nuclear weapons, along with the Hiroshima Declaration by G7 Foreign Ministers and the Hiroshima visit. The Government of Japan offers a humble welcome to the visit.

[After this Speech, towards G7 summit, Japan decided on the following contributory measures]

Cooperation for the Stabilization of the Middle East

In order to tackle root causes of issues of the Middle East including the refugee problem, Japan will promote not only humanitarian assistance from the short-term perspective, but also development cooperation from the long-term perspective including human resource development, which takes advantage of Japan’s strength to achieve social stabilization and inclusive growth. Over the next three years (2016-2018), Japan will provide support totaling about 6 billion dollars including human resource development programs for about 20,000 people. Furthermore, Japan will dispatch Japan Team for Refugees and Community (J-TRaC) to refugee camps by Japan International Cooperation Agency (JICA) and increase the number of Syrian students in Japan.

Responding to the immense global demand for infrastructure development, Japan aims to provide, among all, financing of approximately USD 200 billion to infrastructure projects in the next five years, in order to address the deceleration of the global economy due to low natural resource prices and to reduce future risk of price surge in natural resources.
More specifically, in comparison with the “Partnership for Quality Infrastructure” (PQI) announced by Prime Minister Abe in 2015, the Government of Japan will (i) expand the targeted area from Asia to the whole world, (ii) expand the scope of infrastructure from a narrow sense to a broader sense, which includes natural resources and energy, and (iii) include the Nippon Export and Investment Insurance (NEXI), the Japan Overseas Infrastructure Investment Corporation for Transport and Urban Development (JOIN), the Fund Corporation for the Overseas Development of Japan’s ICT and Postal Services (JICT), the Japan Oil, Gas and Metals National Corporation (JOGMEC) in addition to the Japan International Cooperation Agency (JICA) and the Japan Bank for International Cooperation (JBIC).

Based on the recognition that women are the source of growth, Japan has launched “Development Strategy for Gender Equality and Women’s Empowerment,” which focused on promoting women’s rights, exercising women’s full potential, and advancing women’s leadership. Over the next three years (FY 2016-2018), Japan will conduct human resource development program for about 5,000 female officials and professionals and improve learning environment for about 50,000 female students.