The President of the United States Visits Hiroshima 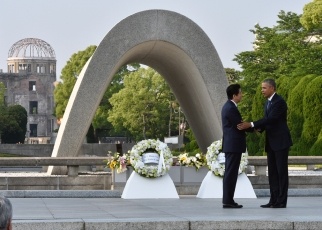 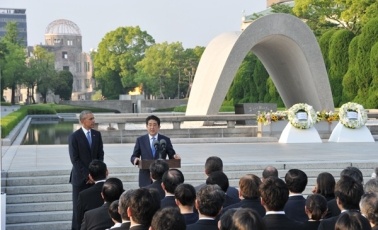 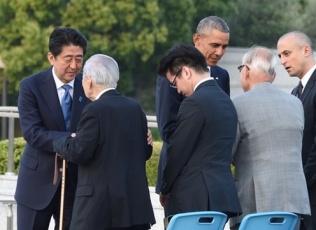 On May 27, the Honorable Barack H. Obama, President of the United States of America, accompanied by Mr. Shinzo Abe, Prime Minister of Japan, visited Hiroshima, as the first sitting U.S. President to visit the city. The overview of the visit is as follows: 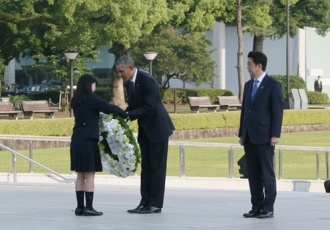 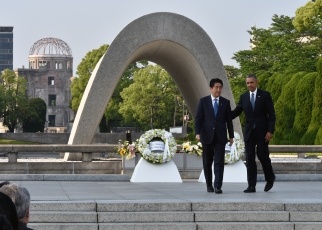 Laying wreaths at the Cenotaph for the Atomic Bomb Victims

In a solemn atmosphere, the two leaders proceeded to the Cenotaph for the Atomic Bomb Victims, led by Governor Yuzaki, Mayor Matsui, Minister Kishida and H.E. Ms. Caroline Kennedy, Ambassador of the United States of America to Japan. There, the leaders were handed wreathes by Hiroshima high-school students who have been commissioned as “Youth Communicators for a World without Nuclear Weapons,” and first, President Obama and then, Prime Minister Abe laid the wreath and offered a silent prayer. 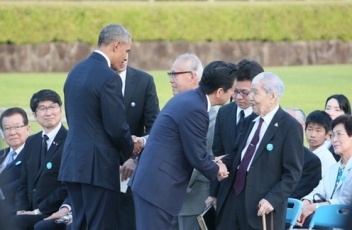 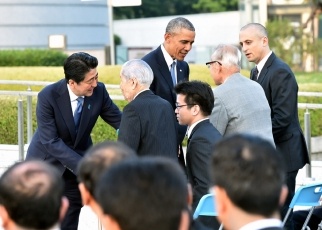 After the statements were delivered, President Obama walked over to atomic bomb survivors, Mr. Sunao Tsuboi and Mr. Shigeaki Mori, and exchanged words with each of them.

(Reference)
Mr. Tsuboi (91), who was invited to attend by the Government of Japan, serves as Chairperson of the Japan Confederation of A- and H-Bomb Sufferers Organizations (Nihon Hidankyo), a nationwide organization of atomic bomb survivors of Hiroshima and Nagasaki (Hibakusha). Mr. Mori (79), who was invited by the Government of the United States, survived the atomic bombing of Hiroshima himself and subsequently spent many years researching 12 American prisoners-of-war who died in the bombing, in order to inform their bereaved families.

(5) Explanation of the Atomic Bomb Dome 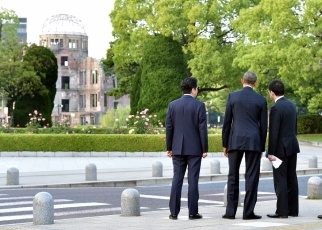 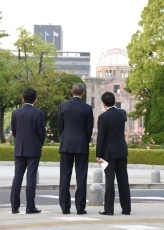 The two leaders proceeded toward the Atomic Bomb Dome. They viewed the dome from the Flame of Peace’s north side, and Minister Kishida provided an explanation. President Obama listened attentively to Minister Kishida’s explanation that the Atomic Bomb Dome was designated a World Heritage Site in 1996 and is a symbol of the bombsite. Minister Kishida also told President Obama about the Children's Peace Monument and the folded cranes that have been sent from around the world, which were immediately in front of them.

President Obama’s visit to Hiroshima was the first visit by a sitting U.S. President and it was an extremely important historical event in terms of commemorating the war dead and revitalizing international momentum for realizing a world free of nuclear weapons. At the same time, the visit symbolized the strength of the U.S.-Japan Alliance, an “Alliance of Hope,” which has been built up over the more than 70 years since the war.