Top > Foreign Policy > International Workshop on Acceptance of Foreign Nationals and their Integration into Japan: Advance together with Young Foreign Nationals – Challenge for Future Generations (Overview and Evaluation) 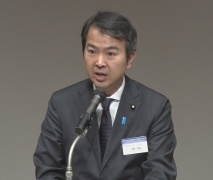 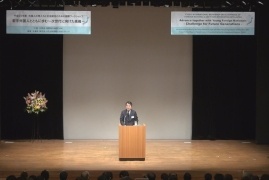 The Ministry of Foreign Affairs of Japan held an International Workshop on Acceptance of Foreign Nationals and their Integration into Japan at the Meguro Persimmon Hall on February 21, jointly with the International Organization for Migration (IOM) under the sponsorship of Meguro City and the Council of Local Authorities for International Relations (CLAIR). Approximately 200 people attend the workshop, including Japanese and foreign intellectuals, members of diplomatic corps in Japan as well as general citizens. Mr. Hirotaka Ishihara, Parliamentary Vice Minister for Foreign Affairs, made opening remarks and Ambassador William Lacy Swing, Director-General of the IOM, delivered the keynote speech. Following the presentation by Prof. Dr. Han Entzinger of Erasmus University, Netherland, for the social integration of foreign nationals based on Europe's experience and presentations by young foreign nationals from South Korea and Brazil, based on their own experience, participants actively exchanged their views in the panel discussion. An overview and the evaluation of the workshop are as follows:

(1) In the workshop, European multicultural experts introduced useful European examples.  Following that, two young foreign nationals,  a South Korean nurse and a Brazilian junior high school teacher, who came to Japan in their teens and achieved their dreams, talked about their own experiences of having overcome various challenges such as mastering of Japanese language, going to university, employment as well as disease which impressed deeply the audience. The panelists from various sectors such as media, education, foreign nationals, and business exchanged views on (a) educational problems, (b) how to accept diversity and (c) challenges the next-generation foreign nationals face in Japan.
(2) In order to encourage growth in Japan under globalization  as well as declining birth rate and aging population, it is essential to tap the energy of foreign nationals. For that purpose, how to accept foreign nationals with diverse values and how to accommodate this to Japan's growth is the key along with the efforts of foreign nationals. Taking up this issue for the first time, the workshop recognized various challenges that need to be dealt with for coexistence with young foreign nationals and introduced a variety of views together with the significance of this issue. Considering the ongoing discussion of how to utilize the foreign nationals in Japan, the workshop proved timely and meaningful.

(1) It is necessary to change the current situation in which Japanese language education for foreign nationals is left to volunteers. Foreign pupils and students need to be dealt with according to their school ages, irrespective of their Japanese skills. Further, legal system needs to be set up to oblige foreign pupils and students to go to school.
(2) The Japanese have a good opportunity for new, rich feelings and to enhance their ways of thinking thanks to foreign nationals. I would like to contribute to the integration of foreign nationals by improving the way of thinking in education.
(3) With no Philippine community organized in Japan, young Filipinos in the country have problems with education and language. I am therefore providing individual counseling with young Filipino residents.
(4) There are many layers in movements of people, including people with advanced knowledge, construction workers and Japanese descendants. I believe social integration will be achieved only when these foreign nationals remain in Japanese society and become an important resource for Japan. The key is how to utilize foreign nationals as a resource for Japan.
(5) We employed many foreign students studying in Japan considering the importance of “diversity”, which contributed greatly to improving the company's environment. By promoting foreign employees to managerial positions and allowing them to participate in corporate decision-making, problems that Japanese businesses have long been struggling to overcome -- such as long overtime work, old traditions and the lack of active participation of women -- could be rapidly resolved.
(6) The chairman summarized the discussion as follows: (1) accepting diversity in Japanese society means accepting the existence of minorities (including women, the elderly and disabled), which in turn leads to the creation of a society comfortable to live in for foreign nationals; (2) the success of young second- and third-generation foreign residents in Japan can redouble the power of Japanese society; and (3) there have been anti-immigrant movements in Europe, which could happen in Japan.  The Japanese as well need to learn from the past history.
Page Top
Back to Foreign Policy