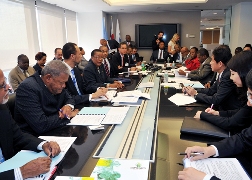 On Friday, September 27,  Minister for Foreign Affairs Fumio Kishida, who was visiting New York to attend the 68th United Nations General Assembly, held the Third Japan-CARICOM Ministerial-Level Conference with the Caribbean Community (CARICOM) member states, which comprise 14 countries in the Caribbean region. An overview of the meeting is as follows (attending from the CARICOM side were the Hon. Dr. Winston Baldwin Spencer, Prime Minister and Minister of Foreign Affairs of Antigua and Barbuda, the Hon. Maxine McClean, Minister of Foreign Affairs and Foreign Trade of Barbados (the chair of the CARICOM side) and others (see Note)).
1. At the outset, Minister Kishida offered his congratulations on the 40th anniversary of the establishment of CARICOM, and stated that Japan and the Caribbean countries are partners that share the fundamental values such as the rule of law and democracy. Minister Kishida also mentioned that a friendly and cooperative relation has been built up over many years, and it is pleasure to see active exchanges taking place at all levels. In response, Minister McClean, the chair for the CARICOM side, and the representatives of each country noted that Japan and the Member States of CARICOM have maintained firm and friendly relations over many years, and stated that they would like to continue advancing Japan-Caribbean relations in the future .
2. Minister Kishida stated that CARICOM is an important partner for Japan, and expressed Japan’s will to continue and strengthen its cooperation in the future, with the fisheries sector, disaster prevention and environmental areas as priorities in particular. Minister Kishida also stated that the Japan-CARICOM Friendship Year 2014 is an opportunity to further strengthen the two parties’ relationship, and formally proposed the holding of the Fourth Japan-CARICOM Ministerial-Level Conference in Tokyo as a highlight of that milestone. Voicing appreciation for Japan’s cooperation thus far, the countries on the CARICOM side also expressed expectation that the Japan-CARICOM Friendship Year will serve as an opportunity to further enhance Japan-CARICOM relations.
3. Several countries of the CARICOM side expressed expectation that the utilization of renewable energies and the technologies such as smart grids, as is being undertaken by Japan on Miyakojima, be introduced. Moreover, they stated that they would like traditional income-level categories to be reviewed because it does not reflect the actual development of those small island states of the Caribbean which are categorized as middle-income countries and therefore cannot receive assistance as other developing countries. In response, Minister Kishida stated that Japan’s assistance is noteworthy for transferring technologies to the supported countries and creating employment, and that Japan would like to pursue cooperation and create win-win relationships. Minister Kishida added that, although the issue of categories based on income level is difficult, it is being studied seriously, and that he intends to continue such study forward so as to take into consideration needs of the CARICOM side and to provide cooperation adapted to the actual situation.
4. Furthermore, Minister Kishida stated that he would like to cooperate in the international arena as well, in such areas as United Nations Security Council reform, the post-2015 development agenda and climate change. Minister Kishida also mentioned that the procedures for contributing to the Third International Conference on Small Island Developing States (SIDS) next year are moving forward.
(Note) Attending the Third Japan-CARICOM Ministerial-Level Conference from the CARICOM side were:
(In addition, Jamaica, Suriname, Saint Vincent and the Grenadines, the Commonwealth of Dominica and Belize attended by proxy)