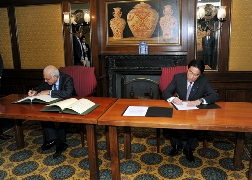 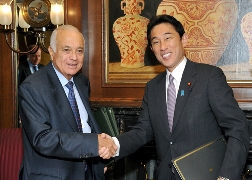 2. At the signing ceremony, Foreign Minister Kishida said that amid the upheaval taking place in the Middle East, the necessity for cooperating with Arab countries is increasing, and this latest cooperative framework is also important as a concrete outcome of the “three pillars” of Japan’s foreign policy in response to the terrorism incident in Algeria in January this year ((1) Strengthening of measures against international terrorism; (2) Support for the regional stabilization; and (3) Promotion of dialogue with Arab and Islamic countries). He said he expects the signing of this MOC will lead to the further development of Japan-Arab relations.

3. Additionally, Foreign Minister Kishida said that in conjunction with the “Third Japan-Arab Economic Forum,” which will be held in Tokyo in December this year, he is calling on the League of Arab States to implement a “Japan-Arab Political Dialogue” to discuss the situation in Syria and the Middle East peace. He also revealed that he is moving ahead with preparations to hold cultural events aimed at deepening mutual understanding with Arab countries.