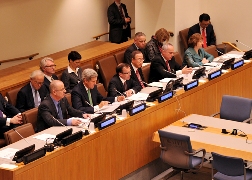 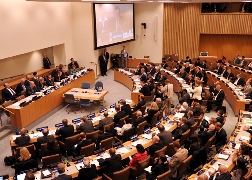 1. In the afternoon of September 25, while visiting New York, Minister for Foreign Affairs Fumio Kishida attended a minister level meeting of the Ad Hoc Liaison Committee (AHLC). High-level officials attended the meeting including Mr. Yuval Steinitz, Minister of Strategic and Intelligence Affairs of the State of Israel, Dr. Rami Hamdallah, Prime Minister of the Palestinian Authority, Mr. Ban Ki-Moon, Secretary-General of the United Nations, Mr. John Kerry, Secretary of State of the United States, and Baroness Catherine Ashton, the High Representative of the European Union for Foreign Affairs and Security Policy.

2. Foreign Minister Kishida welcomed the recommencement of peace negotiations as a result of mediation efforts by the U.S., and said he recognizes that the economic and social stability of Palestine is essential for moving the negotiations forward and achieving peace. He gave an explanation on the Government of Japan’s support for Palestine, including the initiative of the “Corridor for Peace and Prosperity” and the “Conference on Cooperation among East Asian Countries for Palestinian Development (CEAPAD).”

3. At the meeting, many participants welcomed the recommencement of direct negotiations between Israel and Palestine, along with emphasizing the importance of a two-state solution and mentioning the importance of economic development in order to support the peace negotiations. Additionally, Secretary Kerry and Quartet Representative Mr. Tony Blair gave a briefing on the economic development initiatives for Palestine based on promoting investment, and called on donors to cooperate on those initiatives.