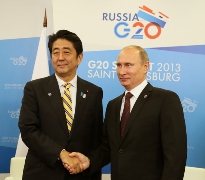 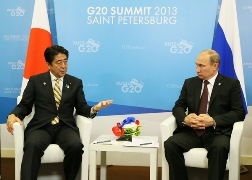 On September 5, commencing at 1:25 p.m. (Russia time) for approximately 40 minutes, Prime Minister Shinzo Abe, on a visit to Saint Petersburg to attend the G20, held a summit meeting with President Vladimir Putin of the Russian Federation.

(1) At the start of the meeting, President Putin stated that he was happy to have frequent contact with each other and expressed his pleasure of meeting with Prime Minister Abe again in Russia.

(2) Prime Minister Abe responded that he was also satisfied with meeting with President Putin again. He then expressed his condolences regarding the substantial damage incurred related to the flood of the Amur River and hoped for a swift recovery under the leadership of President Putin. Prime Minister Abe stated that he would depart for Buenos Aires in that evening in order to attend an International Olympic Committee (IOC) meeting, and that subsequently Deputy Prime Minister Taro Aso would be attending the Summit in his place.

The two leaders concurred on the visit of Russian Foreign Minister Sergey Lavrov and Minister for Civil Defense Sergey Shoygu to Japan on 1 and 2 November, and on holding a 2+2 meeting at the foreign and defense minister level.

3. Cooperation in the field of security

Prime Minister Abe stated that 2+2 would be an important milestone for enhancing the trusting relationship and building robust cooperation between Japan and Russia in the field of security. President Putin welcomed the holding of 2+2. Prime Minister Abe proposed to discuss regional security environment, security policies of each country and also to discuss new cooperative measures in the fields of defence and security. President Putin consent to the proposal regarding these matters.

4. Cooperation in the field of economy

President Putin stated that trade and economic relations between Japan and Russia have been steadily developing. He also commented that the amount of bilateral trade this year is increasing in spite of the global economic slowdown and that cooperation between the two countries has been progressing in a variety of areas. Prime Minister Abe welcomed the fact that economic relations between the two countries had been steadily advancing since his visit to Russia in April, in the area such as energy, urban environment, development in the Russian Far East, agriculture and medical care. In particular, he mentioned specific cooperative measures in the areas of urban environment and medical care, and marketed Japanese equipment to Russia such as the introduction of advanced medical equipment hospitals.

The two leaders affirmed that Japan and Russia would continue to steadily move ahead with consultations at the vice-ministerial level which had been carrying out, and that the two sides would proceed with talks in a friendly, quiet and calm atmosphere.

On the situation in Syria, Prime Minister Abe expressed Japan’s position that there is a very high probability that chemical weapons had been used in Syria, that the use of such weapons would be unforgivable under any circumstances and that Japan would closely collaborate with the international community, including Russia, to improve the situation. President Putin explained the Russian’s recognition, analysis and thoughts concerning the current situation in Syria.