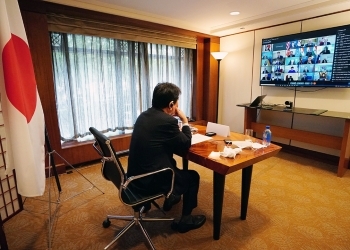 On September 22, from 3:00 p.m. (local time; September 23, around 4 a.m. Japan Time) for approximately 150 minutes, Mr. MOTEGI Toshimitsu, Minister for Foreign Affairs of Japan, who is visiting New York to attend the United Nations General Assembly, attended the G20 Foreign Ministers’ Extraordinary Meeting on Afghanistan. The overview of the meeting is as follows (The meeting was attended by foreign ministers or acting foreign ministers of the G20 members, Spain, the Netherlands, Singapore, and Qatar, the UN Secretary-General, and others).