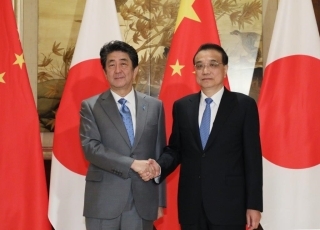 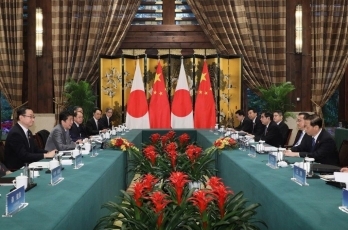 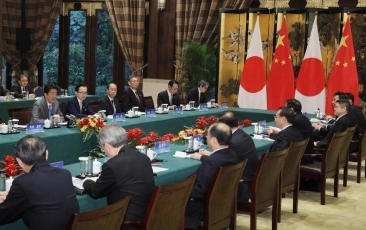 Japan-China Summit Meeting with the Premier of the People’s Republic of China
(Photo: Cabinet Public Relations Office)
On December 25, commencing at around 10 a.m. local time (around 11 a.m. JST), Mr. Shinzo Abe, Prime Minister of Japan, who is visiting Chengdu in the People’s Republic of China to attend the Japan-China-ROK Trilateral Summit meeting, held a Japan-China Summit meeting (for approximately 50 minutes, simultaneous interpretation) and lunch (for approximately 55 minutes, consecutive interpretation) with H.E. Mr. Li Keqiang, Premier of the State Council of China. The overview of the meeting and lunch is as follows.

(2) Prime Minister Abe stated that Japan and China have a significant responsibility toward peace, stability, and prosperity of the region and the world, and expressed his desire to send out a clear message both domestically and internationally of their intention to fulfill this responsibility. In addition, Prime Minister Abe expressed his determination to continue “ceaseless exchanges,” based on the need to strengthen and firmly establish reciprocal visits and dialogues at the high level, ensuring that the current momentum for improving and deepening Japan-China relations is not temporary.

(3) Based on the view that “there will be no genuine improvement in Japan-China relations without stability in the East China Sea,” Prime Minister Abe strongly requested China’s responses to the East China Sea issue, including waters surrounding the Senkaku Islands.

(1) The two sides shared the view on further promoting economic and practical cooperation in areas in which they have shared interests and agree on the direction. Prime Minister Abe expressed his expectations for robust efforts toward enhancing the business environment, such as by improving the implementation of legal systems, further opening up the market, and strengthening Japan-China financial cooperation. Premier Li expressed his intention to further enhance Japan-China economic relations through promotion of market opening.

(2) Regarding the issue of import restrictions on Japanese food products, Prime Minister Abe strongly requested China’s forward-looking response for its early removal of import restrictions, expanding rice exports, and resuming beef exports. With regard to beef, Prime Minister Abe appreciated China’s announcement on December 19 regarding removal of an import ban, noting that it is a positive measure, and expressed his intention to further accelerate coordination between their authorities for the swift resumption of exports to China.

(3) Regarding cooperation in third country markets, the two sides confirmed that they will continue discussing establishment of concrete projects. Prime Minister Abe emphasized the importance of meeting international standards, such as openness, transparency, economic efficiency, and debt sustainability, and stated that in this light the endorsement of the “G20 Principles for Quality Infrastructure Investment” at the G20 Summit in Osaka marked a major step forward.

(5) The two sides confirmed that they will seek an early conclusion of the Regional Comprehensive Economic Partnership (RCEP), based on which both will make efforts to advance the negotiations on the Japan-China-ROK Free Trade Agreement (FTA). Furthermore, Prime Minister Abe underscored the importance of signing RCEP among 16 countries, including India.

(1) The two sides welcomed the active tourism exchanges between Japan and China, and shared the view on further encouraging reciprocal visits between the people of both countries.

5. Matters of Concern to the International Community

Prime Minister Abe explained Japan’s position regarding issues attracting great attentions of the international community, such as the South China Sea issue and the situation in Hong Kong.

(1) Prime Minister Abe expressed his expectations to further “reforms and opening-up” by China.

(2) Regarding trade and investment, Prime Minister Abe expressed his intention to make joint efforts with China toward leveling the playing field and expanding the free and fair economic area. The two sides also exchanged views regarding RCEP.

The two sides exchanged views regarding North Korean affairs, including the recent situation. Prime Minister Abe noted the importance of North Korea’s exercise of self-restraint from further provocations. The two sides then shared the view on the importance of coordinating toward the denuclearization of the Korean Peninsula, a goal shared by Japan and China, and of fully implementing United Nations Security Council resolutions.