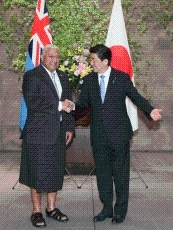 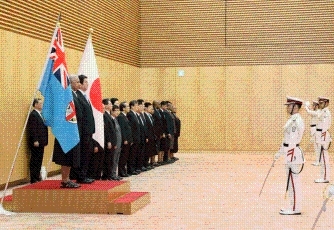 On May 16, commencing at 6:45 p.m. for approximately 80 minutes, Mr. Shinzo Abe, Prime Minister of Japan, held a summit meeting with Rear Admiral (Retired) Josaia Voreqe Bainimarama, Prime Minister of the Republic of Fiji, who is visiting Japan to attend the Eighth Pacific Islands Leaders Meeting (PALM8), which was followed by a dinner with Prime Minister Bainimarama. The overview is as follows.

2. Prime Minister Abe announced the intention of the Government of Japan to provide a grant aid of approximately 300 million yen for maritime conservation and capacity building in disaster risk reduction, adding that the Government would continue to cooperate for the self-sustaining and sustainable development of Fiji. Prime Minister Bainimarama thanked Prime Minister Abe for the Japanese assistance provided to Fiji over many years. The leaders agreed to further promote bilateral trade and investment as well as people-to-people exchanges.

3. The leaders confirmed that they would cooperate towards the successful holding of PALM8 in Iwaki City, Fukushima Prefecture on May 18 and 19.

, and agreed to collaborate closely on important issues facing the region. In addition, the leaders shared the view that they would work together to address the regional situation, including North Korea, and enhance their cooperation in the international arena.

5. The dinner following the meeting took place in a very relaxed atmosphere, during which the leaders exchanged views on a broad range of topics.

Page Top
Back to Japan-Fiji Relations