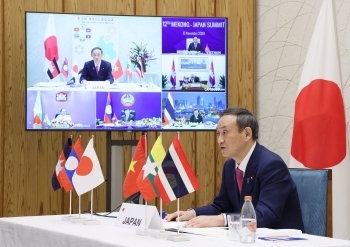 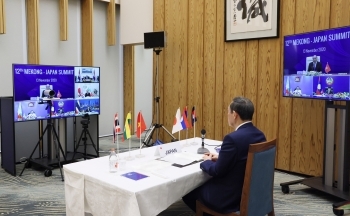 The 12th Mekong-Japan Summit Meeting2 Photo: Cabinet Public Relations Office
On November 13, commencing at 1:00 p.m. (Japan time) for approximately 70 minutes, the 12th Mekong-Japan Summit Meeting was held in a video teleconference format. Mr. SUGA Yoshihide, Prime Minister, attended from Japan and co-chaired the meeting with H.E. Nguyen Xuan Phuc, Prime Minister of the Socialist Republic of Viet Nam. The overview of the meeting is as follows (those attending from the Mekong countries are listed at the end). The Joint Statement (PDF)

was adopted at the meeting.

(1) Prime Minister Phuc of Viet Nam, co-chair of the meeting, stated the following.
I cordially welcome Prime Minister Suga to participate in his first Mekong-Japan Summit. I respect Japan's leadership role in actively contributing to peace and progress in the world. Increasing solidarity between nations is important during the novel coronavirus disease (COVID-19) pandemic, and I value Japan's trustworthy, perpetual, and long-standing friendship. Hundreds of projects within the framework of Japan-Mekong cooperation have contributed to the development of regional society and the economy. I would like to take the opportunity of the present summit meeting to discuss the progress of Japan-Mekong cooperation once again.

(2) Prime Minister Suga, co-chair of the meeting, stated the following.
The Mekong region is the core of the Indo-Pacific region. As I recently expressed during my visit to Viet Nam, Japan will lead contributions to peace and prosperity as an Indo-Pacific nation. Japan renews its promise to continue demonstrating leadership in this region. Japan stands by the Mekong countries at all times and aims at prospering with them. Japan provides tangible measures to work together for the Mekong region.

2 The announcement of the “Five Points of Cooperation”

(1) Promotion of loans and investment for the private sector

Based on the "Initiative on Overseas Loan and Investment for ASEAN" announced last year, Prime Minister Suga announced the "Mekong SDGs Investment Partnership(PDF)

"  during this meeting. This partnership will be utilized to accelerate the formulation of  projects in the Mekong region. Japan will support efforts to achieve SDGs in the Mekong countries as private banks are facing difficulty in extending loans and investment for development projects led by the private sector due to the economic impact of the COVID-19.

Japan has conducted grant assistance for grass-roots human security projects  based on the "KUSANONE Mekong SDGs Initiative"  announced at the 13th Mekong-Japan Foreign Ministers' Meeting in July. At this meeting, Prime Minister Suga announced that a total of 37 small-scale projects amounting to approximately 550 million yen were recently adopted in all five Mekong countries.

(3) Cooperation concerning the rule of law

Japan is ready to dispatch experts to provide high-quality, professional legal and accounting advice in order to aid in the financial independence of the Mekong countries. Utilizing these experts enables various agreements, such as for infrastructure, to be concluded securely. Japan will dispatch these experts swiftly in response to requests from the Mekong countries.

An accurate understanding of marine affairs is an important issue from the perspective of ocean security, preservation of marine interests, and control of illegal fishing. Japan will offer an information-gathering web portal and conduct training for at least 100 staff members of the relevant authorities in the Mekong countries over the next year in order to strengthen their capacity for maritime domain awareness.

Based on the "Mekong Industrial Development Vision 2.0 (MIDV2.0)," Japan has, for example, supported businesses diversifying foreign production bases and adopted a total of 36 projects to date to aid efforts in the Mekong region. Japan will continue to lower the risk of supply chain cutoffs and build a sustainable supply system.

3 The state of Japan-Mekong cooperation

Next, Prime Minister Suga explained the current state of Japan-Mekong cooperation. This is the final year of the "Tokyo Strategy 2018" assistance policy for the Mekong region, and Prime Minister Suga expressed his determination to continue vigorously promoting Japan-Mekong cooperation in line with this strategy. He also stated that he would concentrate specifically on enhancing connectivity in the East-West Economic Corridor and Southern Economic Corridor and steadily implement infrastructure projects amounting to a total of approximately 9 billion US dollars in order to build essential infrastructure bases in all the Mekong countries.
The Mekong countries welcomed the current state of steady progress of Japan-Mekong cooperation and expressed their gratitude for Japan's efforts.

The Joint Statement was adopted under the leadership of Prime Minister Suga, co-chair of the meeting. The Joint Statement confirmed the steady progress of Japan-Mekong cooperation in line with the "Tokyo Strategy 2018" looking toward the Mekong-Japan Summit to be held in Japan next fall.

(Reference) Attendees from the Mekong countries