On July 16, commencing at 10:30 a.m. (local time; July 17, 1:30 a.m. JST) for approximately 1 hour, Mr. MOTEGI Toshimitsu, Minister for Foreign Affairs of Japan, who is visiting the Republic of Guatemala, held a foreign minister's meeting with H.E. Mr. Pedro Brolo Vila, Minister of Foreign Affairs of Guatemala. The meeting was followed by the signing ceremony for an Exchange of Notes on the grant aid for "Economic and Social Development Programme" (provision of equipment and materials for reconstruction of hurricane disaster) and a joint press conference. 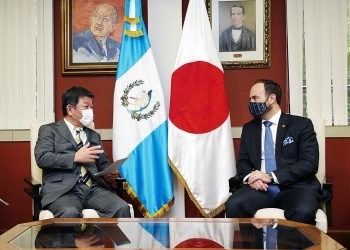 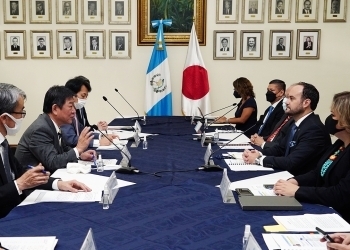 (1) At the outset, Minister Motegi congratulated Guatemala on the bicentennial of its independence and stated that this was the first visit by a Japanese Foreign Minister to Guatemala in 34 years. He stated that the two countries have shared fundamental values and have maintained a traditionally friendly relationship. He hoped to deepen their cooperation on bilateral relations and in maintaining and strengthening the free and open international order based on the rule of law. Minister Brolo welcomed Minister Motegi's visit and expressed his hope to further strengthen the good relationship between the two countries.

(2) Minister Motegi stated that he hoped to make the Tokyo Olympics and Paralympics a safe and secure event and use it as an opportunity to deepen global ties as the world fights to overcome COVID-19. Minister Motegi also expressed his hope that the Guatemala-Japan Parliamentary Friendship Association established in April would promote active exchanges between the two countries. Minister Brolo congratulated Tokyo on hosting the Tokyo Games and said that he would commemorate its success.

(3) Minister Motegi explained that Japan has been providing Guatemala with medical equipment and "Last One Mile Support" based on the belief that international cooperation is the most important factor in dealing with COVID-19. Minister Brolo expressed his gratitude for Japan's support for countermeasures against COVID-19 and asked for Japan's support in providing vaccines.

(4) Mr. Motegi reiterated his sympathy for the damage caused by the hurricanes last November. He stated that Japan would provide emergency support and construction equipment to assist with the recovery of the affected areas mentioned in the Exchange of Notes (to be signed that day). He also stated that Japan frequently suffers from typhoons and volcanic eruptions, and that based on these experiences, Japan would continue to consider providing support for disaster prevention. Regarding the issue of migration to the U.S., he stated that it was important to address the root causes of the problem, such as poverty and public security, and that he would consider cooperating with Guatemala's efforts in these areas. Minister Brolo expressed his gratitude for Japan's support, saying that he hoped to strengthen the economic relationship with Japan and expected investment from Japan.

(5) Minister Brolo expressed his support for Japan’s efforts to implement the “Free and Open Indo-Pacific（FOIP）.” The two ministers also exchanged views regarding regional situations, including North Korea and the East and South China Seas. Minister Motegi asked for understanding and cooperation for the immediate resolution of the abduction issue and received support from Minister Brolo. The two ministers also discussed cooperation in the international arena and shared the view to continue working together.

(6) After the foreign ministers’ meeting, Minister Motegi and Minister Brolo signed an Exchange of Notes on the grant aid of 300 million yen to provide construction equipment for the early recovery and reconstruction of hurricane-affected areas and to strengthen the country's disaster response capacities. 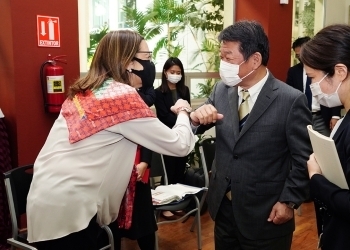 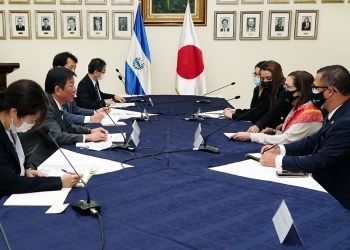 (1) Minister Motegi congratulated El Salvador on the bicentennial of its independence. He stated that Japan has been cooperating with El Salvador in the development of logistics infrastructure, industrial promotion, and human resource development in the eastern region of the country. He also stated that Japan is providing medical equipment to El Salvador to combat COVID-19. He further stated that to solve the Central American migration issue, it is important to address poverty and security, which are the root causes of migration.

(2) Minister Hill stated that Japan, who has always supported El Salvador in difficult situations, is an indispensable partner to the country. She also expressed her gratitude for Japan's support in poverty reduction, public security, infrastructure, and human resource development, and expressed her desire to work together on international issues.

(3) The two ministers also discussed cooperation in the international arena.

(1) Mr. Motegi congratulated Costa Rica on the bicentennial of its independence and welcomed its accession to the OECD this May. He also stated that international cooperation is the most important factor in the fight against COVID-19, and that Japan is offering grant aid by providing medical equipment to Costa Rica.

(3) The two ministers also discussed cooperation in the international arena.