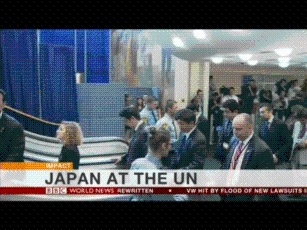 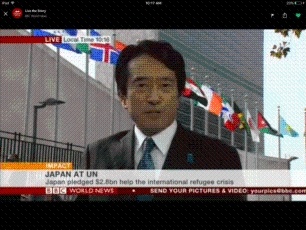 Anchor: We will keep you up to date with important developments inside the UN, but as we have been hearing, the focus of those world leaders there in the Security Council is the situation in Syria. Leaders in New York are trying to salvage what is left of the ceasefire. But, as well as getting aid into the country, there is also the question of how to help those fleeing the war. President Obama has called the global refugee crisis “a test of our common humanity.” There has been a significant announcement on that by Japan’s Prime Minister, Shinzo Abe, today on just that. And we can speak now to his official spokesperson Yasuhisa Kawamura. He joins me from UN Headquarters in New York. Mr. Kawamura, thank you for your time. What is Japan saying about how it can help with the humanitarian situation in Syria?

Mr. Yasuhisa Kawamura, Foreign Press Secretary: First of all, I have no words to express my grief on the recent attack on the human convoy in Aleppo. The world community as a whole should be united for the rescue, and change the situation. Today, we are going to discuss the Syria situation with the participation of a high level. Japanese Prime Minister Abe is now attending this high-level discussion. I think he is going to make additional cooperation package for the international community. Japan has two ways forward. One is to give immediate relief for the refugees, and for neighboring countries, but also at the same time, we have to work on social and economic conditions for reconstruction efforts taken by those countries.

Anchor: As far as taking refugees is concerned, I think last year Japan took three Syrian refugees, and you reject around 99% of applications. Is that a situation that is going to change?

Foreign Press Secretary Kawamura: First of all, we have to address the whole issue of the Middle East and Syrian situation. There are root causes of violent extremism, terrorism, and then the outflow of refugees and the plight and difficulties as felt by the surrounding nations. So international society as a whole has to address those comprehensive, whole issues very effectively. Japan is part of advocating policies and assistance directed to the problems of immediate relief of the refugees and at the same time to help the surrounding countries to reconstruct and be prepared for these social and economic conditions, so that those root causes be removed completely.

Anchor: I hear what you are saying about the bigger picture. The aid and the relief for the region, where Japan is helping. But I want to ask you again about refugees, because of course Barack Obama has just announced a pledge by 50 nations to take in 360,000 refugees in the coming year. And if Japan took in just three Syrian refugees last year, this is not something where you seem able to help.

Foreign Press Secretary Kawamura: Actually, we have a record of receiving refugees from Asian and other regions, so our doors have not been closed for those refugees. For the particular case of the refugees from Syria and the Middle East region, we will continue to discuss with the international community so that our mission to help alleviate the burden of those countries and the refugees themselves be eased. We are going to announce the number of refugees we receive will be increased. There will be about 150 Syrian students to be accepted in Japan, and their families as well. So, we are making an effort. Our doors will not be closed. But again, the issue of refugees, the danger and safety of Syria and the surrounding nations, is imminent, so international society as a whole should be united and deal with this issue collectively. So, Japan will be very please and be ready to continue cooperation, along with like-minded countries, the UN, the US, and other communities.

Anchor: Mr. Kawamura, can I ask you about security closer to home? I know one of the issues that worries Japan is tension in the East China Sea with China.

Foreign Press Secretary Kawamura: Yes. Yesterday the G7 Foreign Ministers gathered here in New York, and issued a new statement calling for international concern about the situation going on in the East China Sea, as well as the issues in the South China Sea. The question is that the rule of law, and the current state of play, should remain. No use of force. Coercion must not be employed to change the status quo. The rule of law, which would involve the recent award of the arbitration by the Hague International Court. So, judging from all of those aspects, I think the international community should raise this issue, and we will continue to call for the attention of the community so that the rule of law in the ocean must be preserved. At the same time, peace and stability of the maritime regions should be preserved.

Anchor: Mr. Kawamura, one store within Japan about which our viewers have shown a lot interest is the future of the emperor who appealed to the public, of course, last month about his health, about being allowed to abdicate. When will the government’s panel of experts meet to discuss this issue given the state of his health? There is some urgency here, is there not?

Anchor: Mr. Kawamura, we appreciate your time, on a very busy day at the UN General Assembly. Thank you. Foreign Press Secretary Kawamura: Thank you.

(*Please be advised that this transcription was produced by a contractor of the Ministry of Foreign Affairs, not by BBC.)

Page Top
Back to Interviews & Articles