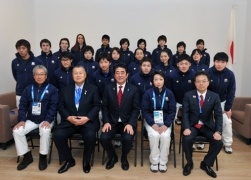 (1) Prime Minister Shinzo Abe attended the XXII Olympic Winter Games being held in Sochi, Russia, on February 7 and 8, 2014, at the invitation of Vladimir Putin, President of the Russian Federation, and Thomas Bach, President of the International Olympic Committee (IOC).

(3) On the following day, February 8, the Prime Minister visited the Olympic Village (Coastal Cluster) and offered words of encouragement to the 19 members of the Japanese National Team. At the beginning of his address, the Prime Minister said, “When I attended the Opening Ceremony last night, I felt anew the wonder of the Olympics. I offer my hearty support for the exciting games.” The Prime Minister also presented a DVD message of encouragement from himself and the Japanese people to curler Ayumi Ogasawara (representative of the Japanese athletes who attended the event) offering words of inspiration, “I hope all of you will be able to put the fruits of all your training on full display, harnessing all the cheers and support,” and at the end shook hands with each of the athletes. Upon leaving the Japanese athletes’ living quarters, Prime Minister Abe was approached by Enrico Letta, Prime Minister of Italy, who had also been visiting the Italian athletes’ quarters, and exchanged words.

(4) In the evening of the same day, the Prime Minister watched the Team Figure Skating ladies short program and cheered for the Japanese Team (skater Mao Asada). At the venue, the Prime Minister exchanged greetings with Ottavio Cinquanta, President of the International Skating Union, and other members of the International Olympic Committee (IOC), and received congratulations on winning the bid to host the 2020 Olympic and Paralympic Games.

(1) The attendance of the Prime Minister at the first Olympic Games held after the decision of the 2020 Tokyo Olympic and Paralympic Games provided an opportunity for Japan to take the first step of promoting its initiatives, including the Sport for Tomorrow program, which aims to promote the Olympic Movement around the world.

(2) The Prime Minister offered his enthusiastic support to the Japanese National Team members, encouraging them to do their best by putting the fruits of their hard training on full display while drawing strength from all the support and provide dreams, hopes and courage to people throughout Japan.