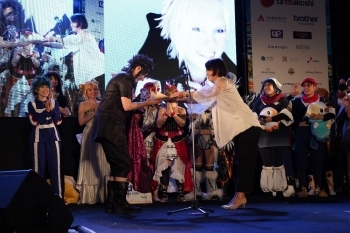 "World Cosplay Summit"
The World Cosplay Summit began in 2003 and the Summit is now in its 20th year. The event aims at contributing to the “creation of international exchange through youth culture originated in Japan”, such as Japanese anime, manga and video games. Since 2009, the Ministry of Foreign Affairs has been co-hosting the event with Aichi Prefecture, Nagoya City, Aichi Television Broadcasting and others as members of the World Cosplay Summit Executive Committee, and has awarded the winning team with the Foreign Minister's Prize.