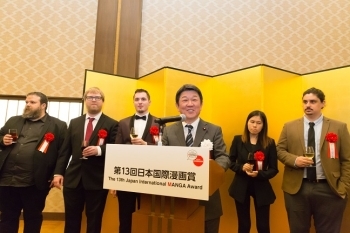 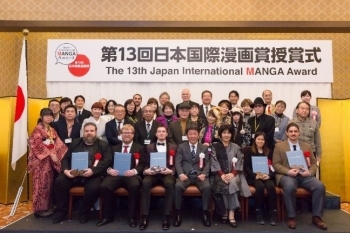 Award Winners and Other Guests 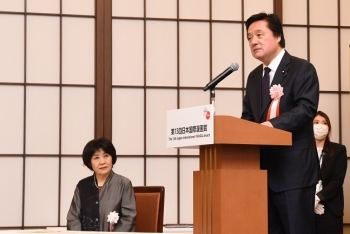 On February 18, the 13th Japan International MANGA Award Ceremony was held at the Iikura Guest House. The Japan International MANGA Award was launched by then Foreign Minister Mr. ASO Taro in 2007 with the aim of honoring Manga artists who have contributed to the promotion of Manga overseas and to international cultural exchange through Manga. Among 345 entries from 66 countries and regions, 15 works were selected this year, including one for Gold Award (Israel) and three for Silver Awards (Spain, Thailand and Brazil).

At the Award Ceremony, one Gold Award and three Silver Awards were presented with certificates of commendation and trophies. Foreign Minister MOTEGI Toshimitsu stated that, “Manga provides an influential platform for the development of global cultures. We received a large number of entries from many countries and regions for this year's MANGA Award. The entries varied greatly both in their styles and messaging and helped us to once again realize the broad expressive power of Manga.”

Chairperson of the Selection Committee, Ms. SATONAKA Machiko, gave a review of the works, in which she stated that, “the world of Manga is a great forum that fosters discussions on culture and philosophy and expressions of feeling and sensibilities.” She also expressed delight about the diversity of this year's works.

The Award Ceremony was attended by the Executive Committee members, Ms. SHIRAISHI Saya, Mr. SUGIYAMA Kotaro, Mr. Frederik L. Schodt, Mr. YOKOTA Kiyoshi and the Selection Committee members, Ms. IPPONGI Ban, Mr. FUJITA Tsutomu, Mr. MIURA Mitsuru. Among the guests were famous Manga artists, publishers and people in the cultural circle and they interacted with the Award winners at the reception which followed the Ceremony.

The Award winners were invited to Japan by the Japan Foundation, and they will be visiting publishing companies, animation studios, Manga-related museums in addition to attending the Ceremony.