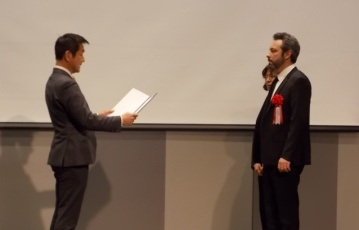 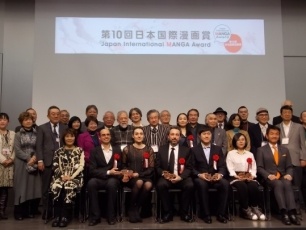 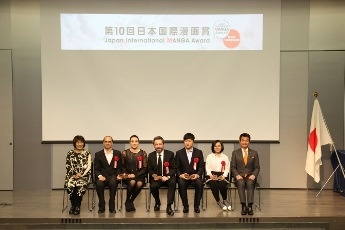 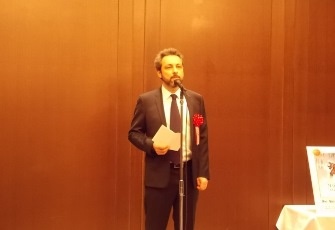 Speech by the Gold Award Winner,
Mr. Xavier Dorison (France), at the reception

The Japan International MANGA Award was launched by Then Foreign Minister Taro Aso in 2007 with the aim of honoring MANGA artists who have contributed to the promotion of Manga overseas and international culture exchange through Manga. Among 296 entries from 55 countries and regions, 14 works were selected this year, including one Gold Award work and three Silver Award works.

Since this year commemorates the 10th anniversary of the Award, a memorial symposium was held for a keynote speech and a panel discussion prior to the Award Ceremony. Ms. Machiko Satonaka, Chairperson of the Selection Committee and a Manga artist herself, delivered a keynote speech titled “History of Japan International Manga Award” and introduced the history of Japanese Manga and the past Gold Award works. The panel discussion was held under the theme of“The aim of International Manga Award - How is MANGA’s perceived in the world?”, inviting Ms. Yukari Fujimoto (Professor, School of Global Japanese Studies, Meiji University) as a coordinator. The panelists included Mr. Frederik L. Schodt (Writer, Translator), Ms. Saori Yoshida (KADOKAWA Corporation) and Ms. Yoshimi Kurata (Manga Artist) and they discussed the international landscape surrounding Manga culture.

At the Award Ceremony, one Gold Award and three Silver Awards were presented with certificates of commendation by Parliamentary Vice-Minister for Foreign Affairs, Mr. Kiyoshi Odawara and trophies by Ms. Machiko Satonaka, Chairperson of the Selection Committee. Parliamentary Vice-Minister Mr. Odawara expressed his hope in his address for the winners to contribute to further development of Manga in their own countries and promotion of international exchange through Manga. Chairperson Ms. Satonaka gave a review of the works, in which she stated that she would continue to expect great works and looked forward to working hard together for the promotion of Manga worldwide.

The Award Ceremony was attended by the Selection Committee members, Mr. Yoshimi Kurata, Ms. Kimie Shiga, Mr. Tsutomu Fujita, Mr. Koichi Yuri, and the Executive Committee members, Ms. Saya Shiraishi, Mr. Kotaro Sugiyama and Mr. Kiyoshi Yokota, Mr. Hiroyasu Ando President of the Japan Foundation, and Mr. Frederik L. Schodt. Among the guests were famous Manga artists, publishers and people in the cultural circle and they interacted with the Award winners at the reception which followed the Ceremony.

The Award winners were invited to Japan by the Japan Foundation, and they will be visiting publishing companies, animation studios, manga-related museums besides attending the Ceremony.