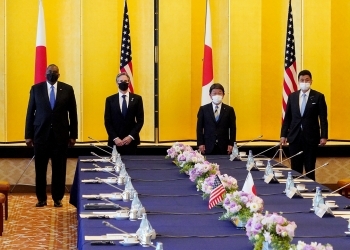 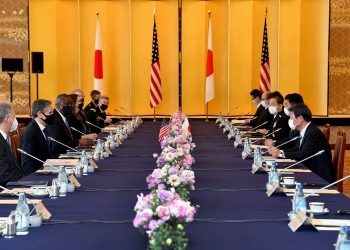 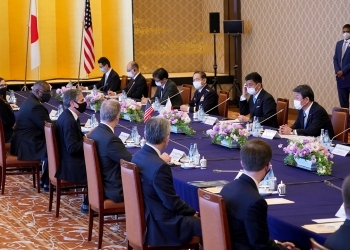 On March 16, commencing at 15:00 p.m. for approximately 1 hour and 30 minutes, the Japan-U.S. Security Consultative Committee (SCC) (Japan-U.S. "2+2") was convened in Tokyo, Japan. The meeting was attended by Mr. MOTEGI Toshimitsu, Minister for Foreign Affairs, and Mr. KISHI Nobuo, Minister of Defense, from the Japanese side, and the Honorable Antony Blinken, Secretary of State, and the Honorable Lloyd Austin, Secretary of Defense, from the U.S. side. The overview of the meeting is as follows (following the meeting, Joint Statement(PDF)

The four ministers reaffirmed that the Japan-U.S. Alliance remains the cornerstone of peace, security, and prosperity in the Indo-Pacific region, and renewed the unwavering commitment of both countries to the Japan-U.S. Alliance. Amid growing geopolitical competition and challenges such as COVID-19, climate change, and revitalizing democracy, the four ministers concurred to promote a free and open Indo-Pacific and a rules-based international order.

In light of the severe security environment, the four ministers concurred to further deepen the coordination to strengthen the deterrence and response capabilities of the Japan-U.S. Alliance. Japan expressed its resolve to enhance its capabilities to bolster national defense and the Alliance. The U.S. underscored its unwavering commitment to the defense of Japan through the full range of its capabilities, including nuclear.

In light of the discussion at the Japan-U.S. "2+2" and this Joint Statement, the four ministers instructed their respective offices to advance concrete works to strengthen the Alliance. They concurred to hold another SCC later this year to confirm their outcomes.

The four ministers held candid exchange of views and aligned their recognition on the security environment of the region.

Recognizing the increasingly serious regional security environment, the four ministers concurred to further deepen the coordination to strengthen the deterrence and response capabilities of Japan-U.S. Alliance by consulting on Alliance roles, missions, and capabilities.

The four ministers shared the view that they will steadily implement the realignment of U.S. forces in Japan, from the perspective of mitigating the impact on local communities including Okinawa, while maintaining the deterrence of the Japan-U.S. Alliance.