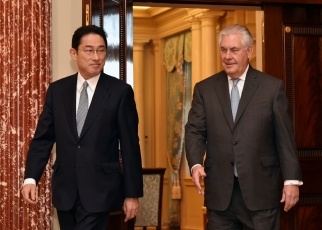 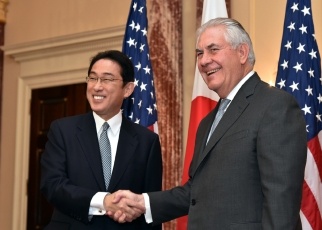 On February 10th, commencing at around 11:10 p.m. JST (around 9:10 a.m. local time, February 10th) for approximately 30 minutes, Mr. Fumio Kishida, Minister for Foreign Affairs, held a Japan-U.S. Foreign Ministers' Meeting with the Honorable Rex Tillerson, Secretary of State of the United States of America. The overview of the meeting is as follows.

The two sides affirmed the importance of the Japan-U.S. Alliance as the cornerstone of peace and stability in the Asia-Pacific region, and agreed to strengthen Japan-U.S. cooperation in addressing the issues in the region.

(1) The two sides reviewed the regional situation, including the issues on North Korea's nuclear and missile development, the East China Sea and the South China Sea. Both sides shared the view that the security environment in the Asia-Pacific region is becoming increasingly severe.

(2) The two sides agreed on the importance of Japan-U.S. and Japan-U.S.-ROK trilateral cooperation for responding to the issues regarding North Korea's nuclear and missile development. Furthermore, Minister Kishida explained Japan's position regarding the abductions issue and affirmed that Japan and the United States will continue to coordinate in responding to North Korea.

Minister Kishida explained the efforts to mitigate the impact on Okinawa. With regard to the relocation of MCAS Futenma, the two sides affirmed that the relocation to Henoko is the only solution.