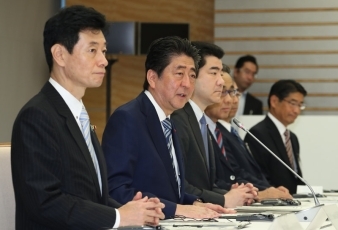 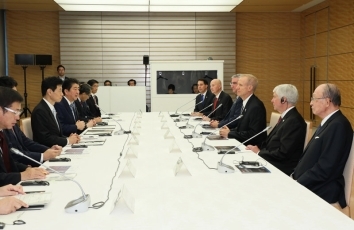 Prime Minister Shinzo Abe received a courtesy call from five governors visiting Japan to attend the 49th Annual Joint Meeting of the Japan-Midwest U.S. Association for approximately 20 minutes from 9:20 a.m. on September 11. The overview of the courtesy call is as follows.

1. Prime Minister Abe expressed his appreciation for all efforts made by each state governor and people involved in the Japan-Midwest U.S. Association, towards strengthening the Japan-U.S. economic relationship. Prime Minister Abe also said that he was proud of the fact that activities of Japanese companies in the U.S. have contributed not only to the revitalization of local economies through investments and job creation but also to the enhancement of the Japan-U.S. relationship.

2. In response, each state governor expressed their appreciation for the activities of Japanese companies and their wish to further strengthen the Japan-U.S. economic relationship.

This meeting has been held every year alternately in Japan and the U.S. since 1967, in order to promote mutual exchange between Japan and Midwest states in the U.S. with the aim to enhance trade, investments, industry, technology, and culture. Mr. Yuzaburo Mogi, Honorary CEO and Chairman of the Board- Kikkoman Corporation, is currently the chairman of this Association. In 2017 from September 10th to 12th, this meeting is being held in Tokyo with the main theme “Japan-Midwest U.S.:Strategies for Economic Growth”.