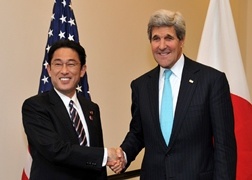 On November 7, commencing at around 9:25 p.m. for approximately 40 minutes, Mr. Fumio Kishida, Minister for Foreign Affairs held a Japan-U.S. Foreign Ministers’ Meeting with the Honorable John Kerry, Secretary of State of the United States, during Minister Kishida’s visit to Beijing. An outline of the meeting is as follows.

Minister Kishida said the Government of Japan is accelerating its responses to the Ebola virus disease, and explained that Japan’s initiatives include the dispatch of two Self-Defense Force personnel to the U.S. Africa Command, the dispatch of healthcare experts via the WHO, and further assistance amounting up to USD 100 million.

In response, Secretary Kerry said Japan’s assistance and leadership is excellent and will have an extremely significant impact, and he sincerely appreciates it.

(1) With regard to North Korea, Minister Kishida explained that Japan dispatched Government officials to Pyongyang, where they conveyed Japan’s strong determination to resolve the abductions issue to the Supreme Power. He said Japan will continue to demand that North Korea conduct a prompt investigation and swift notification of the results. Minister Kishida also explained that Japan’s policy of aiming for a comprehensive resolution of outstanding issues of concern such as the abductions, nuclear and missile issues remains unchanged. Minister Kishida and Secretary Kerry shared the view that they will continue to place importance on cooperation between Japan, the United States and the Republic of Korea (ROK).

(2) In addition, Minister Kishida explained the recent circumstances regarding Japan-China relations, and Secretary Kerry said he appreciates it as positive developments.

4. Responding to the ISIL

Minister Kishida and Secretary Kerry shared recognition that it is necessary to correspondingly respond to the threat posed by the ISIL in a unified manner. Minister Kishida said coordination within the international community to counter the ISIL is strengthening, and efforts including countervailing vigorous public relations activities, the preventing of fundraising and inflows of personnel, and measures for countering violent extremism are also important.

Secretary Kerry stated that the international community needs to support Ukraine in a coordinated manner.

In response, Minister Kishida welcomed that Ukraine’s Supreme Council election was held in a largely peaceful manner, but on the other hand said it is concerning that the ceasefire agreement is not being completely fulfilled and fighting continues in some regions. Minister Kishida said it is regrettable that an “election” was held in a separatist-controlled region on November 2.

Minister Kishida and Secretary Kerry confirmed that as a result of intensive efforts over the past few weeks, negotiations between Japan and the United States have advanced appreciably, along with concurring that they will work together to promptly conclude the negotiations.