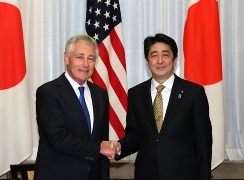 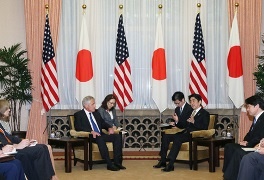 1. Regarding Japan’s security policy, PM Abe explained that, from the perspective of “Proactive Contribution to Peace” based on the principle of international cooperation, the GOJ has been steadily moving forward on various efforts including the examination of the relationship between the right of collective self-defense and Japan’s Constitution, and stated that he would like to lead these efforts to strengthening the Japan-U.S. Alliance. Secretary Hagel responded that he once again welcomed such GOJ’s efforts.

2. In addition, PM Abe stated that, under the situation where the importance of the Japan-U.S. Alliance is increasing with dramatically changing security environment in the Asia-Pacific Region, the U.S. has been making it clear to firmly maintain the Rebalancing policy and Japan welcomes it. Both sides agreed to further strengthen the Alliance by continuously working on deepening the bilateral security and defense cooperation including the revision of the Defense Guidelines, while capitalizing on the upcoming visit by President Obama.

4. Both sides also exchanged frank views on situations including China, North Korea and Ukraine. They confirmed that any attempt to unilaterally change the status quo through the use of coercion and intimidation is completely unacceptable, and, regarding North Korea, they reaffirmed the importance of closer cooperation among Japan, the U.S. and the ROK, taking into account the recent trilateral summit meeting.