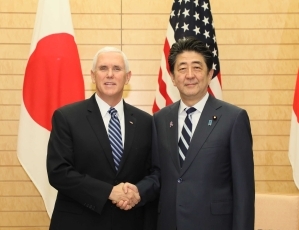 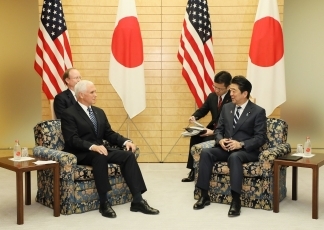 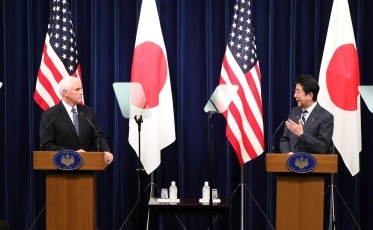 Photo: Cabinet Public Relations Office
From November 12 to 13, The Honorable Mike Pence, Vice President of the United States of America, visited Japan. The overview of the visit is as follows.

Prime Minister Abe and Vice President Pence carried out close policy coordination based on their shared positions prior to the ASEAN-related Summit Meetings and the APEC Economic Leaders' Meeting. The two sides agreed that they place importance on the North Korea issue and maritime security, and reaffirmed their determination for Japan and the U.S. to cooperate closely to lead peace and prosperity in the region.

The two sides shared the recognition that the full implementation of United Nations Security Council (UNSC) resolutions continues to be necessary toward the complete denuclearization of the Korean Peninsula.
Furthermore, they confirmed that Japan and the U.S. will continue to cooperate closely to address ship-to-ship transfers prohibited by UNSC resolutions.
Moreover, they reaffirmed close cooperation toward the early resolution of the abductions issue, which is the most important issue for Japan.

(3) Cooperation toward a Free and Open Indo-Pacific

Both sides confirmed that Japan and the U.S. would continue to provide leadership while cooperating with Australia, India, and the ASEAN countries, etc. to strengthen cooperation to realize the vision of a "free and open Indo-Pacific".
Furthermore, they both welcomed the steady progress of Japan-U.S. cooperation in the Indo-Pacific.

Prime Minister Abe explained the outcomes of his visit to China last month, and the two sides shared the recognition that it was important for both Japan and the U.S. to continue close cooperation to hold constructive dialogue with China.

The two sides reaffirmed that they would further expand trade and investment between Japan and the U.S. in a mutually beneficial manner, and realize economic development in a free and open Indo-Pacific region based on fair rules, in accordance with the Japan-U.S. Joint Statement agreed in September.

Both sides reaffirmed their commitment to advance the realignment of U.S. Forces in Japan (USFJ), including the relocation of Marine Corps Air Station (MCAS) Futenma to Henoko, in order to maintain the operational and deterrent capability of the USFJ and mitigate the impact on local communities, including Okinawa.

Both sides confirmed that they would strengthen space cooperation in areas of security, exploration, and industry, including considering in a concrete manner cooperation of Hosted Payloads and the lunar orbital platform, the Gateway.

On November 13, commencing at around 10:20 a.m. for approximately 20 minutes, Deputy Prime Minister and Minister of Finance Taro Aso held a meeting with Vice President Pence. The overview of the meeting is as follows.

(1) Deputy Prime Minister Aso and Vice President Pence confirmed the importance of advancing Japan-U.S. cooperation in order to realize the vision of a "free and open Indo-Pacific".
(2) Both sides also exchanged views on the economy and regional issues.
(3) Regarding the Japan-U.S. Economic Dialogue, it was decided that the two countries would coordinate the next round at a time appropriate for both parties.

Taking the opportunity of the visit by Vice President Pence to Japan, the Governments of Japan and the U.S. issued the "Japan-U.S. Joint Statement on Advancing a Free and Open Indo-Pacific Through Energy, Infrastructure and Digital Connectivity Cooperation(PDF)