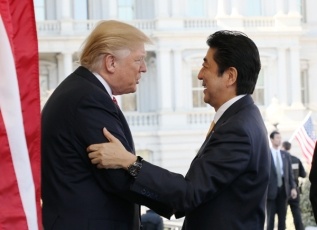 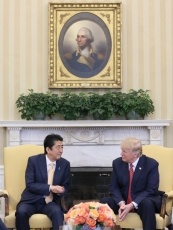 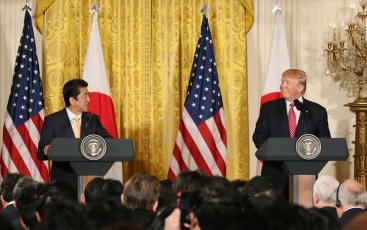 In addition, Prime Minister Abe welcomed President Trump's vision of great and strong United States, and the two leaders agreed to further strengthen the bonds of the Japan-U.S. Alliance and affirmed that Japan and the United States will play a leading role in ensuring peace and prosperity of the Asia Pacific region and the world.

The two leaders discussed the increasingly severe security environment in the Asia-Pacific region, including the issues on North Korea's nuclear and missile development, which constitutes a new level of threat, and unilateral attempts to change the status quo in the East China Sea and the South China Sea, and shared these concerns. Furthermore, the two leaders shared the recognition that the presence of the U.S. Forces in Japan based on the Japan-U.S. Security Treaty and the Status of U.S. Forces Agreement is important, and that it is necessary to continually strengthen the Japan-U.S. Alliance. Moreover, both leaders recognized the importance of strengthening multi-layered cooperation with allies and like-minded countries, and building a network with allies, centered on the Japan-U.S. Alliance.

(3) The Japanese and U.S. Economies

The two leaders held candid and constructive discussions on how to foster mutually beneficial relations by further elevating Japan-U.S. economic relations in a wide range of fields and working together.

Prime Minister Abe and President Trump issued a joint statement that affirmed their strong determination to further strengthen the Japan-U.S. Alliance and their economic relationship.

In political and security areas, the two leaders affirmed the strong determination of Japan and the United States, under an increasingly severe security environment in the Asia-Pacific region, to further strengthen their efforts in the Japan-U.S. Alliance, which is the cornerstone of peace, prosperity and freedom in the region. In particular, the joint statement 1) made specific reference to a commitment to extended deterrence; 2) affirmed that Article 5 of the Japan-U.S. Security Treaty covers the Senkaku Islands; and 3) that the relocation of MCAS Futenma to Henoko is the only solution.

Regarding the economy, in addition to affirming their commitment that both Japan and the United States will strengthen their bilateral and regional economic relations based on the rules of free and fair trade, the two leaders agreed to proactively cooperate in specific areas that would be beneficial to both sides. In order to address these issues, both leaders decided to establish an economic dialogue led by Deputy Prime Minister Aso and Vice President Pence.

Prime Minister Abe and President Trump recognized that the Japan-U.S. Alliance, the cornerstone of peace and prosperity in the Asia-Pacific region, is supported not only through defense and security, but also through economic relations, and that the Japan-U.S. economic relations that were once symbolized by "friction" are now a thing of the distant past. In this context, Prime Minister Abe took the opportunity to explain to President Trump that through domestic manufacturing activities, Japanese corporations have created many jobs and investments in the United States, worked with the United States as good corporate citizens of the United States always walking in step with the United States, and have overcome the trade frictions. In response, President Trump praised and welcomed the investment by Japanese companies and the two leaders agreed to build win-win relations.

Prime Minister Abe explained the strategic and economic significance of the TPP Agreement, based on the view that the agreement reached through several years of tough negotiations is the most advanced rule of trade and investment and should become the standard for the 21st century. Both leaders shared the recognition that Japan and the United States have consistently and firmly supported free trade since the end of World War II and led efforts to promote free trade, realizing their current prosperity.

The two leaders shared the view that dynamic economic relations between Japan and the United States are a source of strong growth and job creation for both countries, the Asia-Pacific region and the global economy, and agreed to further advance these economic relations to an even higher level. Moreover, both leaders decided to establish an economic dialogue led by Deputy Prime Minister Aso and Vice President Pence, based on the three pillars of economic policies, cooperation in areas such as infrastructure and energy and rules for trade and investment.