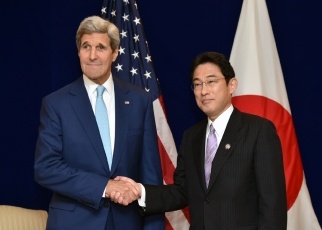 On August 6, commencing at around 10:20 a.m. for approximately 50 minutes, Mr. Fumio Kishida, Minister for Foreign Affairs, who is visiting Kuala Lumpur, held a Japan-U.S. Foreign Ministers’ Meeting with the Honorable John Kerry, Secretary of State of the United States. The outline of the meeting is as follows.

Secretary Kerry stated that August 6 is the day that an atomic bomb was dropped on Hiroshima, and that it is an extremely important day when discussing the impact of war.
Minister Kishida responded by expressing his gratitude for Secretary Kerry’s comment, and said that he would like to cooperate on achieving a “world without nuclear weapons” toward the future, as advocated by the Honorable Barack H. Obama, President of the United States. Additionally, Minister Kishida stated that he would express his respect for the groundbreaking accomplishments which Secretary Kerry has been energetically achieving, such as the final agreement on the Iranian nuclear issue and the re-establishment of diplomatic relations with Cuba.

Minister Kishida explained that he would contact with Mr. Ri Su Yong, Foreign Minister of North Korea, work directly with him on the abductions issue and discuss the nuclear and missile issues. Minister Kishida and Secretary Kerry shared the view that Japan and the United States will continue to tackle the issues in a coordinated manner.

The two sides concurred that they will continue to address the Ukrainian issue together at G7 by paying due consideration to the current situation.

Minister Kishida stated that Japan will serve as the Chair for the G7 Summit next year, and that he will extend a warm welcome to the Foreign Ministers’ Meeting in Hiroshima. Secretary Kerry replied that he is looking forward to the visit.

6. The collection of communications records by the U.S. National Security Agency (NSA)

The two sides shared the view that based on the outcome of the telephone meeting between Prime Minister Abe and Vice President Joe R. Biden, Japan and the United States will continue discussions in order to handle to this issue appropriately.

Minister Kishida expressed his regret that an agreement in principle could not be reached at the TPP Ministerial Meeting, and stated that the leadership of the United States is needed more than ever so that the negotiations will not go adrift. The two sides shared the view that they will continue to cooperate for a prompt agreement.