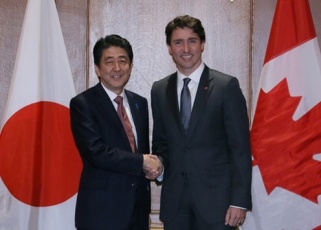 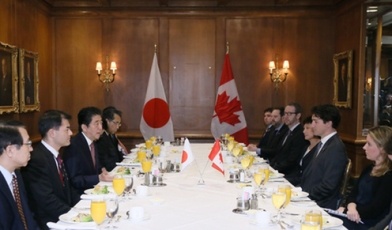 On March 31, commencing at 1:15 p.m. (2:15 a.m. on April 1, Japan time) for approximately 70 minutes, Mr. Shinzo Abe, Prime Minister of Japan, who is currently visiting the United States for the Nuclear Security Summit Meeting, held a Japan-Canada Summit Meeting (Working Lunch) with the Right Honourable Justin Trudeau, Prime Minister of Canada. The overview of the meeting is as follows.

. Prime Minister Abe criticized the terror bombing attacks in Brussels and explained that Japan, as the G7 chair country, intends to aggressively promote measures to combat terrorism in cooperation with Canada and other members of the international community. Additionally, he noted that the global economy is the top issue in the current environment, and the G7 countries must drive sustainable and robust growth in the global economy and need to present strong commitments and policy coordination. He explained that Japan intends to work closely with countries including Canada to send a clear message to the world at the Ise-Shima Summit.

(2) In response, Prime Minister Trudeau stated that it is necessary for major countries to cooperate on measures to combat terrorism, that he and his spouse are looking forward to visiting Japan for the Ise-Shima Summit in May, that he hopes to discuss a variety of issues, including security and anti-terrorism measures, at the Summit, that promoting investment is important for global economic growth and that he hopes Canada and Japan can cooperate in this area, and that he aims to further strengthen the partnership between Canada and Japan, as countries with shared values, including in trade and investment, science and technology, and research and development areas.

(2) Prime Minister Abe expressed continued interest in seeing cooperation in the early realization of liquefied natural gas exports from Canada and improvement of the business environment. In response, Prime Minister Trudeau explained that Canada intends to make efforts to achieve constructive results. The two leaders also shared the view on moving forward with their domestic discussions and consultations of the Trans-Pacific Partnership.

(3) Furthermore, the two leaders reaffirmed the importance of cooperation in science and technology areas and interaction among young people.

4. Conditions in East Asia and other regions

The two leaders exchanged opinions on situations in East Asia, including North Korea, and other regions, and they shared the view to hold a robust discussion on regional situations, including Asia, at the Ise-Shima Summit.

The two leaders also discussed the climate change issue and disarmament and non-proliferation, and they confirmed to continue cooperation in these areas.