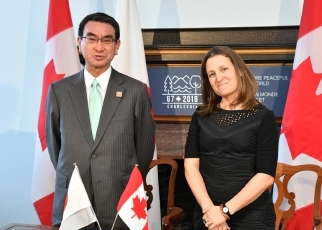 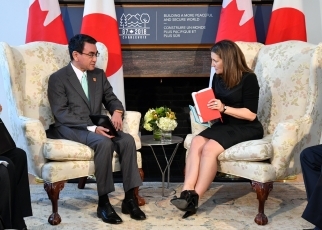 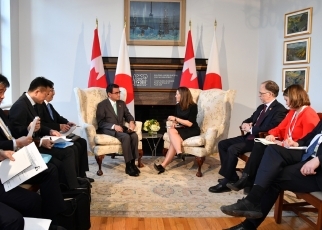 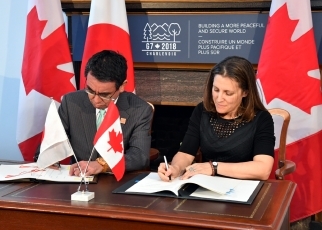 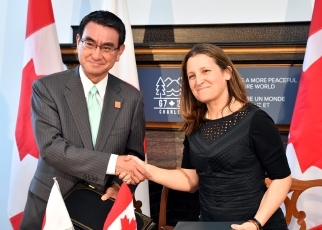 1 On April 21, commencing at 6:05 p.m. (7:05 a.m. on April 22, Japan time) for approximately 40 minutes, Mr. Taro Kono, Minister for Foreign Affairs, who is visiting Toronto, Canada to attend the G7 Foreign Ministers' Meeting, held a Japan-Canada Foreign Ministers' Meeting with the Honourable Chrystia Freeland, Minister of Foreign Affairs of Canada. The overview of the meeting is as follows.

(1)The two ministers confirmed that the G7 should issue robust messages regarding North Korea and various other challenges at this G7 Foreign Ministers' Meeting and the G7 Summit in June.

(2)With regard to North Korea, the two ministers shared recognition that a nuclear-armed North Korea will never be tolerated, and reaffirmed that they would continue the maximum pressure campaign to ensure that North Korea dismantles all weapons of mass destruction and all missile programs in a complete, verifiable and irreversible manner. Furthermore, they also shared the view that they will work together to address North Korea’s use of “ship-to-ship transfer” and other methods for evading sanctions, in order to ensure the effectiveness of related United Nations Security Council resolutions.

(3)Additionally, the two ministers exchanged views on economic issues, including the Trans-Pacific Partnership (TPP), and the various challenges in the regional and international communities.

), and shared the view that they will further promote security cooperation between Japan and Canada.
The Japan-Canada ACSA is an agreement that establishes frameworks such as the payment procedures for the reciprocal provision of supplies and services between the Japanese Self-Defense Forces and the Canadian Armed Forces, and is expected to enable the smooth and prompt provision of supplies and services between the two parties.