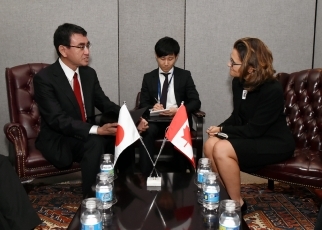 On September 19, commencing at around 2:05 p.m. (around 3:05 a.m. on September 20, Japan time), for approximately 30 minutes, Mr. Taro Kono, Minister for Foreign Affairs, who is visiting New York to attend the United Nations General Assembly, held a meeting with the Honourable Chrystia Freeland P.C., M.P., Minister of Foreign Affairs of Canada. The overview of the meeting is as follows.