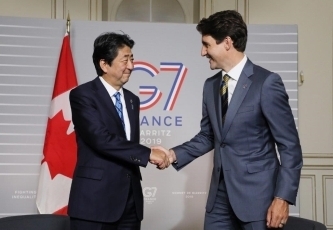 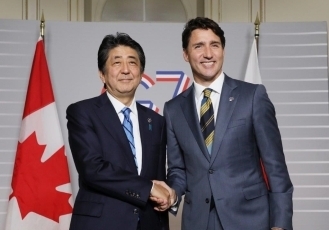 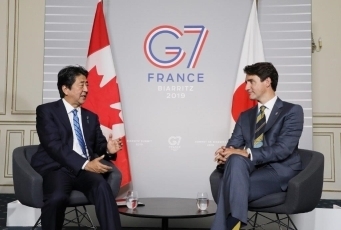 Japan-Canada Summit Meeting3 Photo: Cabinet Public Relations Office
On August 24, commencing at 5:35 p.m. (local time) for approximately 30 minutes, Mr. Shinzo Abe, Prime Minister of Japan, during his visit to France to attend the G7 Biarritz Summit, held a meeting with the Right Honourable Justin Trudeau, Prime Minister of Canada. The overview of the meeting is as follows.

(1) The leaders reaffirmed that they would further strengthen their strategic partnership under the vision of a “free and open Indo-Pacific.” The leaders also welcomed the concrete and strategic progress made in Japan-Canada cooperation, including Canada’s dispatch of aircraft and vessels for addressing ship-to-ship transfers and the entry into force of the Japan-Canada Acquisition and Cross-Servicing Agreement (ACSA).
(2) Regarding the economy, the leaders shared the view that they would promote bilateral trade and investment.

The leaders exchanged views regarding the Korean Peninsula, China including the issue of detained Canadians and Hong Kong, and the Amazon forest fires in Brazil.