Speeches by the Foreign Minister

Video message by Foreign Minister Hayashi, on the occasion of His Majesty the Emperor’s Birthday 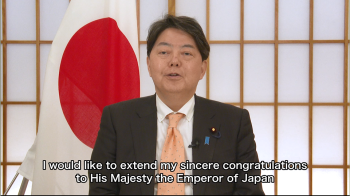 I would like to extend my sincere congratulations to His Majesty the Emperor of Japan on his 62nd birthday today.

Despite the prolonged ramifications of the COVID-19 pandemic, His Majesty the Emperor and Her Majesty the Empress have prioritized contact with the people of Japan by participating in a variety of online events. In addition to online interactions, His Majesty met in person with 35 incoming ambassadors to Japan to accept their credentials and received farewell courtesy visits from many ambassadors who left Japan last year. Furthermore, His Majesty also held an audience for distinguished guests from 11 countries visiting Japan to attend the opening ceremony of the Tokyo 2020 Olympic Games. I would like to express my heartfelt gratitude for His Majesty’s contributions to deepen and enrich the friendship and goodwill between Japan and other countries and areas.

On the topic of new developments, last year brought an important change for Her Imperial Highness Princess Aiko, who celebrated her coming age in December – a joyous occasion for Their Majesties the Emperor and Empress and other Members of the Imperial Family, as well as the people of Japan. I would like to close my speech by offering my heartfelt prayers and wishes for His Majesty’s continued good health, and the prosperity of the Imperial Court, as well as the good health of everyone watching this video. Thank you.

Page Top
Back to Speeches by the Foreign Minister