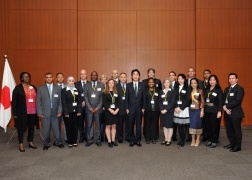 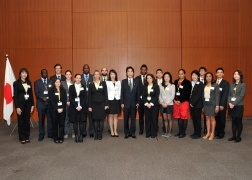 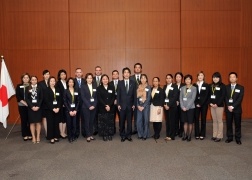 (1) The training program was held at the Ministry of Foreign Affairs of Japan from October 19 to 26, in which 60 local staff members working at Japan's overseas missions (Embassies, Consulates, and Permanent Missions) participated. The local staff is essential to the diplomatic service. The 60 members (Note 1) are the ones selected among approximately 5,200 local staff (members) worldwide with recognition of their particularly outstanding performance.

(2) The training program included lectures by the relevant bureaus and divisions of the Ministry of Foreign Affairs (Note 2) and visits to the surrounding areas of Tokyo. On October 20, the 60 participants paid a courtesy call on Mr. Minoru KIUCHI, State Minister for Foreign Affairs, and received his words of appreciation and encouragement.

(1) The participants deepened their understanding of the mechanisms and policies concerning the various tasks of Japan’s overseas missions, and acquired the latest information and firsthand knowledge about Japan. It is expected that the training will lead to their further contributions to the missions’ work and accordingly strengthening of the activities of the overseas missions.