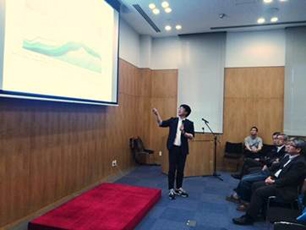 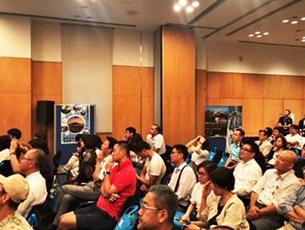 the audience listening to the speech

On September 15, "The Meiji Restoration 150th anniversary event "was held by the Meiji Restoration 150th anniversary event committee formed by Kagoshima, Yamaguchi, Kochi and Saga Prefectures with Consulate-General of Japan in Shanghai. Akihito Oshiro introduced the situation of those days and the role of the Japanese who had connection with Shanghai in his speech titled "Relationship between the Meiji Restoration and Shanghai". This interesting speech charmed the audience. Besides that, members of the event committee introduced and promoted tourism to their prefectures at the event. 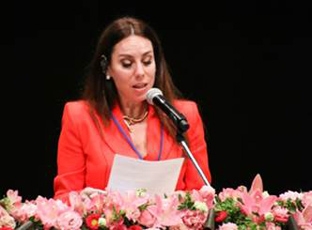 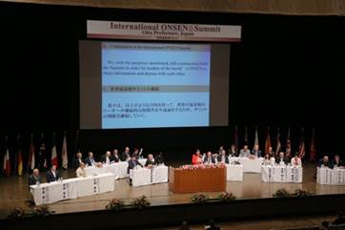 From May 25 to 27, "International ONSEN Summit" was held in Beppu City, Oita Prefecture. Top management from the ONSEN(hotspring) areas all over the world and researchers discussed regional development by taking advantage of hotsprings. Mr.Katsusada Hirose ,Governor of Oita Prefecture , said "It is important to bring, exchange, and disseminate information on ONSEN from various perspectives—such as tourism, medical care, health and energy through exchange programs ". At the end of the Summit, a declaration was issued announcing that ONSEN Summit will be continued to discuss and share information for further development of ONSEN areas.

IX Talks in a circle in hometown in Iiyama City Talks in a circle 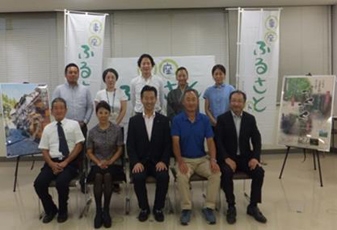 On September 4, "Talks in a circle in hometown" was held in Iiyama City, Nagano Prefecture. Mr. Mitsunari Okamoto, Parliamentary Vice-Minister for Foreign Affairs（at the time）, had vigorous discussions with local business persons and staff members of local associations who are interested in increasing the number of the foreign tourists. The participants expressed various opinions and offered suggestions about regional revitalization through bringing more foreign tourists to Nagano Prefecture. 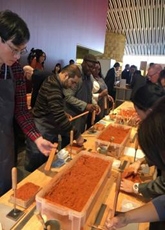 Diplomats making paperweights
during the tour 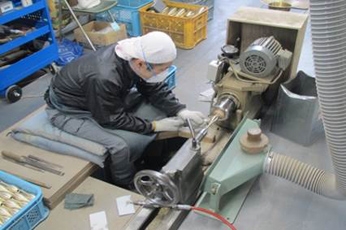 Learn more about the destinations of our Diplomats' study tour !

The history of metalworking in Takaoka goes back over 400 years. For the area's industrial development, Toshinaga Maeda, the local feudal lord, invited metal-casters to Takaoka, and provided them with homes in the Kanayamachi district. This area was transformed into the birthplace of Takaoka's metal-casting industry.
Metal-casting in Takaoka began with making daily necessities, and later developed them into industrial arts to make flower vases and Buddhist altar fittings. The Takaoka Great Buddha, made of Takaoka bronze, is the symbol of the city. The statue is one of the three famous Great Buddhas in Japan.