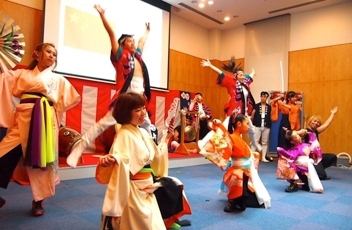 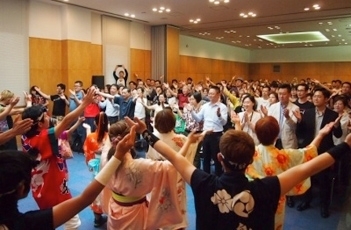 On June 9, the Consulate General of Japan in Shanghai jointly hosted an interactive performance event with Osaka City and Konohana Tourism Association to promote Osaka's summer festivals. The event was held as part of the Japan-China Treaty of Peace and Friendship 40th anniversary celebration. The hall was filled with excitement as performers demonstrated Danjiribayashi, a local festival music of Osaka, Japanese style contemporary dance pieces, humorous street performances and Kawachi Ondo, a folk dance originated in Osaka region. 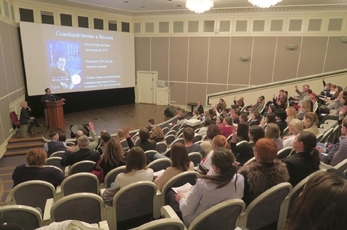 The lecture in St. Petersburg 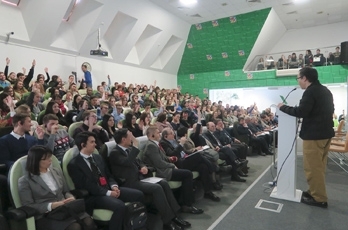 The audience raising hands for questions at the lecture in Moscow

From February 26 to March 2, a series of lectures were held to introduce Japan's onsen ryokan (traditional style hot spring hotel) culture as well as the "Omotenashi" spirit in Japanese hospitality that takes pride in anticipating and fulfilling people's needs in advance. The lectures were a part of Japan Brand Program that the Ministry is implementing throughout the world.

The Ministry of Foreign Affairs co-organized with Fukushima prefecture the "Fukushima Fair in MOFA" to help promote the sale of Fukushima products. The Fair featured fresh and juicy seasonal fruit peaches as well as delicious Sake and various foods and confectionaries. Many members of the Diplomatic Corps joined the event and supported Fukushima's further recovery.

Learn more about the regions participated in our Regional Promotion Seminar on June 21, 2018 !

Sake From Niigata to the World: The Birth of "Sakeology"

Niigata Prefecture is home to the greatest number of sake breweries in Japan, and is ranked 3rd in terms of quantity of sake produced in the nation. Preeminent sake results from a harmony of the techniques of Niigata's brewers and the natural landscape and resources of the region, such as climate, rice, water, and brewing history. The prefectural government, Niigata University and the Niigata Sake Brewers Association join together to introduce their steps towards the world's first example of a new discipline, "Sakeology," as the study of sake, with its roots in Japanese culture and traditions.

At the Regional Promotion Seminar on June 21, 2018