Local promotion activities are held each year at the receptions celebrating the birthday of His Majesty the Emperor in many of Japan's diplomatic/consular facilities abroad. Last year's examples are shown above.

Local Promotion at the residence of Ambassador to France

With a backdrop of lively exchanges between local governments of Japan and France and active public relations implemented by Japanese local governments in France, Japanese Embassy provides a wide variety of assistance in cooperation with CLAIR (Council of Local Authorities for International Relations) 's office in Paris. 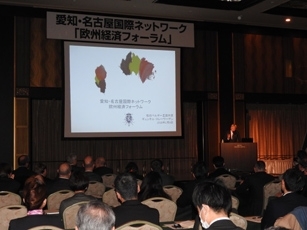 Learn more about the regions participated in our Regional Promotion Seminar on December 11, 2017!

Hachi, a dog honored with a statue outside Shibuya Station, has become a household name around the world. Taking advantage of Hachi's local roots, Northern
Akita is now engaging in a variety of tourism promotion efforts. As consumers shift towards healthier ingredients, demand for edamame (soy bean) has grown. Accordingly, Akita has expanded production and is looking to export new products to foreign markets.