After the Great East Japan Earthquake South African rescue team deployed a rescue operation in the affected area. Iwanuma City, Miyagi Prefecture, which had been severely damaged by the disaster, was registerd as a Tokyo 2020 "Arigato" Host Town of South Africa for its support. In January 2020, the delegation of Iwanuma City visited South Africa and held a heart-warming exchange including a video conference between the elementary school students of both countries.

The exchange between Kochi Prefecture and Federated States of Micronesia began with the arrival of “Mori Koben,” a Japanese who moved to Truk Islands, now called Chuuk Lagoon, in 1891. More than 2000 descendants of Koben, “Mori Family,” still live in Chuuk State. Mori Family use a Japanese word “KIZUNA,” which means bonds, when they express the relationship with Kochi Prefecture. Beyond the 150th anniversary of his birth in 2019, “KIZUNA” between the two regions will continue.

Kasama ware is one of the local industries in Kasama City. The city is known as one of the largest production centers of pottery in East Japan and the closest to Tokyo. In response to an invitation from the city of Lahr, Germany, to the opening ceremony of the Kasama Ware Exhibition, the Mayor of Kasama and his group visited Lahr from January 16th to 20th. The article shows how Kasama City faces the future taking on new challenges, with descriptions on the successful ceremony, deepening friendship with Lahr and Kasama Ware’s aggressive development in overseas markets.

The affiliated organisations of 6 ports run by Aomori Prefecture, Ishikawa Prefecture, Sakai Port Authority, Kitakyushu City, Hiroshima Prefecture and Kobe City are working together to attract cruise ships for the purpose of increasing the number of foreign tourists visiting Japan.
In February, they held a Cruise Seminar in Japan House London in the UK, where the largest number of cruise shipping companies are located in Europe. They invited cruise shipping companies and travel agencies to explain convenience and tourism resources of each port. The participants had fruitful exchanges of opinions at the reception and conducted business negotiations. 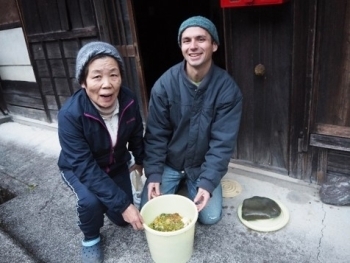 Mr. Eric Matarrese successfully tried to make takuan pickles, with the help of a neighbor in Kawakami Village

Mr. Eric Matarrese came to Japan from Los Angeles 9 years ago. Then he moved to Kawakami Village, Nara Prefecture, in 2016, as a Local Vitalization Cooperator. Now, he dedicates himself to introduce a lot of charms and the lifestyle of the village in both Japanese and English. In Kawakami Village, located at the source of the Yoshino River and the Kinokawa River, Yoshino forestry has a history of 500 years and he feels it is a collaboration between nature and human beings. By spending time with the local people and participating in community festivals, he discovered lots of precious “treasures.”

This shop celebrates its 17th anniversary. In front of JR Shinbashi Station, it shows dignified presence that attracts the eyes of people walking by. It is the first two-prefecture-jointly-operated antenna shop in Japan. The charms of Kagawa and Ehime prefectures, facing the beautiful Seto Inland Sea, are represented in a multiple layers.
Now, let's find out various seasonal items of Setouchi, invited by its sea breeze.