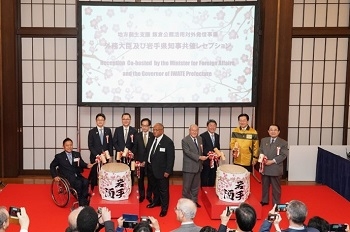 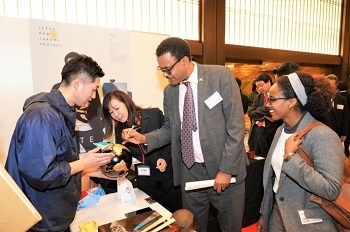 Foreign Minister and a head of local government co-host a reception in the Iikura Guest House for the diplomatic corps, foreign chambers of commerce and industry in Japan, in order to promote a variety of charms of the local community.

On February 7, the reception co-hosted by Foreign Minister and Governor of Iwate Prefecture was held to introduce their tourism, foods, traditional crafts. The Morioka Sansa Odori dance performed on the stage also attracted guests. 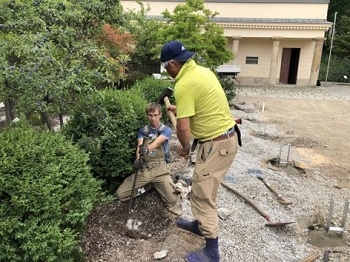 Digging a hole for making a base of prop 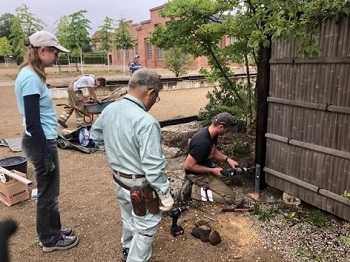 Tosu City, Saga Prefecture, has built a heartfelt relationship with Zeitz City, Germany, through their piano made in the German city and cherished by Tosu’s citizens. Tosu has further deepened the ties with Zeitz building and maintaining a Japanese garden in Moritzburg Castle Park for over 15 years. Last summer, the garden was renovated as a part of the Japanese Garden Restoration Projects conducted by MLIT in cooperation with MOFA. During the renovation, Tosu City dispatched some gardeners.

Networking of Japan-related organizations and people in Portugal 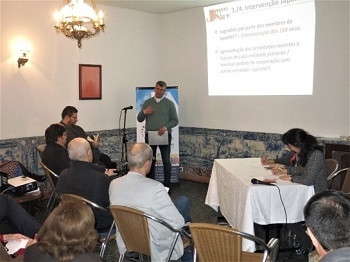 Presentation in the meeting 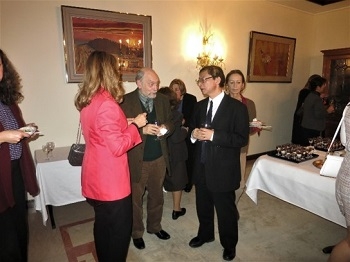 2020 is the 160th anniversary of the signing of the Treaty of Peace, Friendship and Commerce between Portugal and Japan. A lot of anniversary events will be held throughout this year. In Portugal, more than a dozen years ago, JapanNET started as a networking body of Japan-related organizations and people, and served as a base for information exchange and communication among the members. In February, the 17th JapanNET meeting was held, where participants exchanged their opinions about sister city’s friendship exchange programs and memorial events in Portugal in 2020. 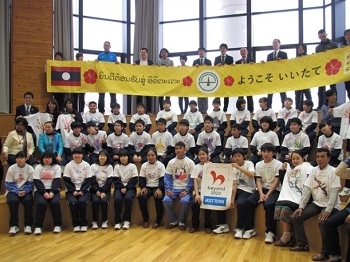 Junior High School students of Dong Nai and Iitate wearing the T-shirts co-produced at a workshop. 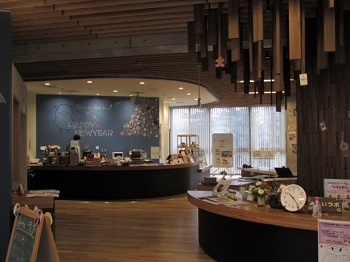 Cafeteria at Futaba Future High School is run by its students and is open to the local community.

We introduce the Arigato Host Town Initiative of Iitate Village and Hirono Town in Fukushima Prefecture, where the young generation plays a major role in promoting exchanges.

A junior high school student from Laos talked about his dream of visiting Japan again in the future by himself. The relationship that has been developed with Argentine since the 2002 FIFA World Cup has led to the new ties through the Arigato Host Town Initiative.

What can we leave as a legacy of the Tokyo 2020 Olympics and Paralympic Games? 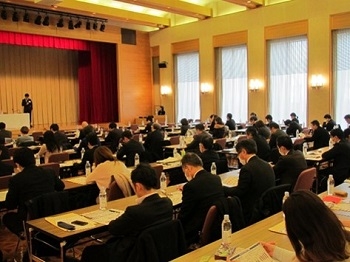 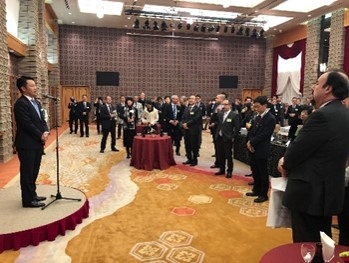 On January 22, Local Partnership Cooperation Forum was held at Mita Conference Hall with a view to support international activities of local governments and municipalities. In the foreign policy briefing session, a MOFA official gave a lecture on Japan-Mekong cooperation. In the three parallel sub-sessions that follow, participants discussed in the respective theme with specialists and exchanged opinions. Shortly afterwards, a networking reception was hosted by Mr. Nakatani, Parliamentary Vice-Minister for Foreign Affairs for the diplomatic corps and local governments officials.

Regional revitalization from the perspective of international people -vol.7- (“Utilization of closed schools and the possibility of revitalization in depopulated areas - through the research in various mountain villages” by Dr. Oussouby Sacko) 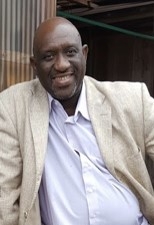 Dr. Oussouby Sacko, who is from the Republic of Mali and came to Japan in 1991 to study in Kyoto University Graduate School, has been the president of Kyoto Seika University since 2018. He has dedicated himself to the field research on the utilization of closed schools and the regional revitalization in depopulated areas. For the next step of regional revitalization, international people who move into local area and their activities to use the areas’ potential and the innovation will open the possibilities, he says. 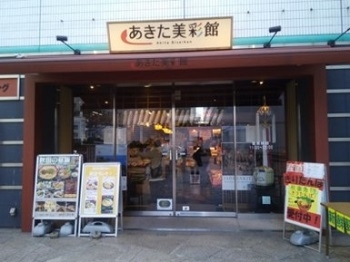 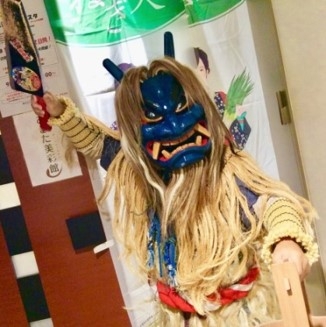 “We want you to feel Akita with your five senses.” Akita Bisaikan is an antenna shop that embodies such thoughts. 12 years have passed since it was born in Shinagawa. A rich assortment of more than 1,000 items including Akita's specialty food ingredients, sweets, local sake, and handicrafts. In addition, you will have a chance to meet real Namahage Demons in the dining space where you can enjoy Akita's specialties. Let’s visit the shop with a feeling of excitement and fear!