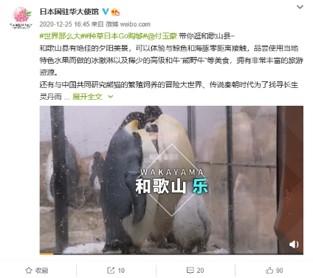 Video streaming by the Embassy’s weibo

Last December, The Ministry of Foreign Affairs and the Embassy of Japan in China conducted promotional events of Japanese local attractiveness, and shared information so that many Chinese people can experience charms of the Japanese local areas while staying in China.
Throughout the period of event, the Embassy posted the PR videos of 50 municipalities. In a live program in Beijing broadcasted on the Sina Weibo account, they showed how to enjoy Japanese local areas, including their food, crafts and sightseeing spots. 1.7 million viewers watched the program.

Towards the World Horticultural Exhibition Yokohama in 2027 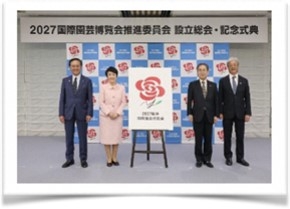 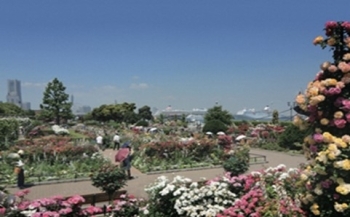 The World Horticultural Exhibition will be held in Yokohama from March to September in 2027. The exhibition is aimed at spreading global appreciation of horticulture, proposing lifestyles with flowers and greenery, promoting regional and economic development, and contributing to solving social issues.
In a kick-off meeting and commemorative ceremony held last November, “Promotion Committee of the 2027 World Horticultural Exhibition Yokohama” was established, and the logo mark of the exhibition was announced. Full-fledged preparation for the exhibition has already started.

‘ARIGATO’ Host Towns for Supporting Reconstruction: Paralympic sports and music bring us together －Kami Town in Miyagi Prefecture and the Republic of Chile－ 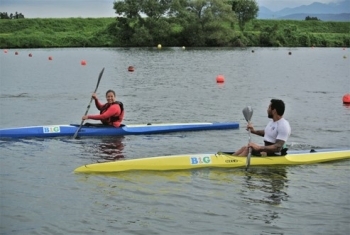 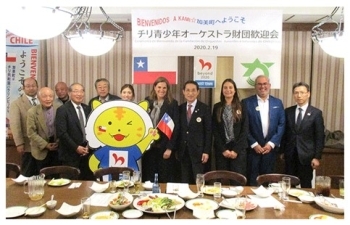 Kami Town in Miyagi Prefecture accepted a lot of residents evacuated from Minamisanriku Town of the same Prefecture severely affected by the Great East Japan Earthquake. Minamisanriku Town, which had already built a good relationship with Chile by that time, received support for reconstruction from the country after the disaster. Those linkage led Kami Town to become the ‘ARIGATO’ (‘Thank you’ in Japanese) Host Town for Chile. Since then Kami Town has promoted interactions with Chilean Paralympians and members of a junior orchestra and developed a new relationship with the country toward the Tokyo 2020. 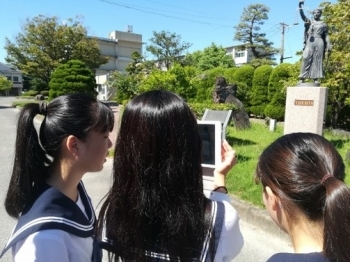 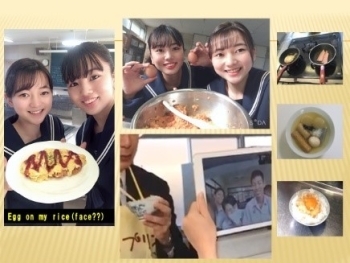 Students demonstrated how to make 4 kinds of egg dishes

Aichi Prefectural Tsushima High School is promoting global education. As part of this program, they have formed a sister school tie-up with Watsuttharam School (MSR) in Bangkok, Thailand, and have been interacting with each other through Skype since September 2019. Students introduced online their school to the sister-school in real-time and demonstrated how to make Japanese egg dishes. Even in the covid-19 crisis, students keep on trying to make the exchanges fulfilled by discussing, for example, what impact could covid-19 have on society, what efforts could be made to achieve SDGs and so on.

Enjoy the great nature of northern countries! Exchange between two cities -Tobetsu Town in Hokkaido and Leksand City in Sweden - 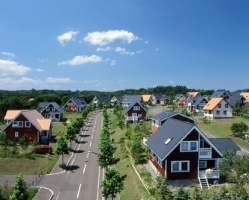 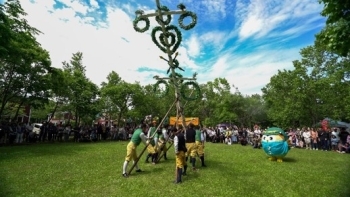 Tobetsu Town in Hokkaido is a beautiful town with rich nature located near Sapporo City. The beautiful counrty landscape and natural environment of Tobetsu Town is said to be similar to that of Sweden. Now, Leksand City in Sweden and Tobetsu Town are sister cities. Tobetsu Town developed new town, named “Sweden Hills”, with Swedish type residence and it also holds traditional Swedish festival called “Summer solstice Festival” every year in the Town. 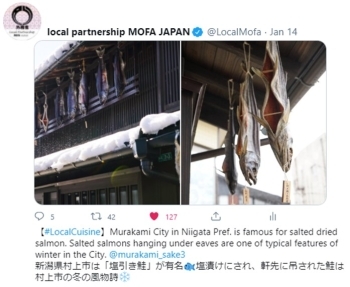 A lot of salmons hung under the eaves of townhouses under the cold sky!A tweet about a special product “Shiohiki-salmon” in Murakami City, Niigata Pref. gaind the most attention this month. It is a scene that can be seen mainly in the streets of Shonaimachi, Murakami City every December. The streets are called "Echigo Murakami Salmon Shiobiki Kaido" because they are lined with salmons under the eaves. This is the very end of a traditional way of processing, it is fermented and aged by drying in this way and creating a unique umami taste rich in amino acids. 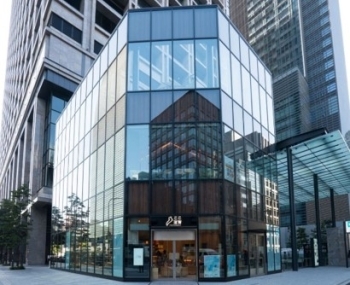 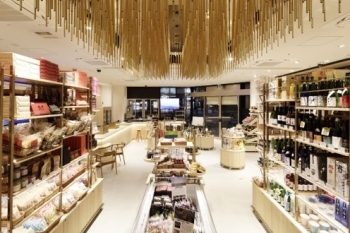 There is a dignified presence at the big Nihonbashi intersection! "COCOSHIGA", an information dissemination base of Shiga Pref. was born in 2017. This place, where a lot of people and vehicles come and go, is exactly the place related to Omi merchants. Omi is an old province of Japan, which comprises the present Shiga Prefecture and Omi merchants played active roles in various part of Japan including Nihonbashi, the starting point of five highways in Edo period. In the store, about 1000 items such as Omi's agricultural products and crafts are always available. In addition to a wide selection of products in the shop, they provide many possibilities to know attractiveness of the prefecture for example through online events.When you enter the shop, you may hear the breath of Omi merchants.