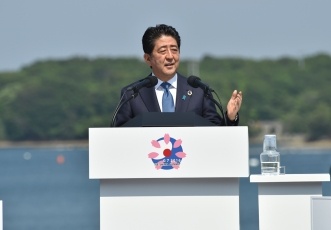 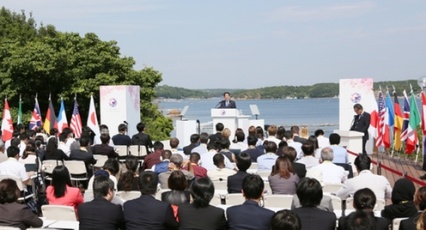 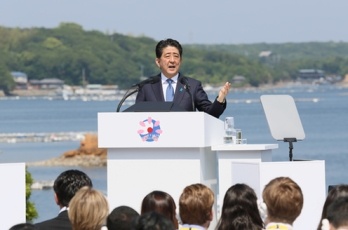 First of all, as Prime Minister of Japan, I wish to extend my heartfelt welcome to all those of you visiting Ise-Shima on this occasion from all around the world.

I imagine you have had the opportunity to enjoy the charms of Japan’s heartland areas-- beautiful inlets, a wealth of natural beauty, and sumptuous seafood and mountain area food specialties.

Whenever I encounter the dignified atmosphere in the solemn setting of Ise Jingu, I always have a very sobering feeling. Ise Jingu has spun a history that extends some 2,000 years, from time immemorial. There, people have offered up prayers for bountiful harvests, prayers for peace, and prayers for human happiness.

The peace and prosperity we enjoy in the present day were built upon these kinds of people’s prayers. It is at such a place that this year’s G7 summit had its start.

“We came together because of shared beliefs and shared responsibilities.” Forty-one years ago, in the face of the “Oil Shock,” a global economic crisis, our predecessors gathered together for the first time in the Château de Rambouillet in France and reached agreement on historic policy coordination.

The peace and prosperity that we enjoy today is the result of these predecessors taking on challenges together in the belief that the future can be changed.

And, we will reliably hand down to our children’s and grandchildren’s generations the peace and prosperity of the present day. To do this, we who live in the present day must join hands in taking on the challenges that lie before us, never avoiding these issues.

The G7, which shares fundamental values such as freedom, democracy, human rights, and the rule of law and has driven global peace and prosperity until the present day, bears that great responsibility. Japan and its G7 colleagues have together successfully sent out from Ise-Shima to the world a clear message that we will coordinate in tackling various challenges facing the international community.

Our main theme was the global economy.

Declines in stock markets have resulted in asset losses in excess of 1,500 trillion yen worldwide in less than a year. Just recently the markets have recovered somewhat and are in a sustained lull, but the unpredictability remains unchanged from before and the global market is in a state of unrest.

Why is that? The greatest risk is that “clouds” are now beginning to be seen in emerging economies.

The prices of commodity including crude oil, steel, and other raw materials and agricultural products have experienced declines of more than 50 percent in little more than a year. This is comparable to the range of the drop suffered during the financial crisis after the Lehman Brothers’ collapse. It has struck a major blow to resource-rich countries and emerging economies dependent on agriculture and basic materials industries.

Investment, which nourishes growth, has also decreased. Last year, the rate of increase in investment in emerging economies dropped to a level even lower than the level during the financial crisis after Lehman Brothers’ collapse. It was also the first time since the Lehman Brothers’ collapse that capital inflow into emerging economies turned negative.

Moreover, delayed responses to structural challenges in emerging economies, including excess capacity, the expansion of non-performing loans and other issues in China, have been pointed out and there are concerns that the situation may deteriorate further.

Against this backdrop, the global economic growth rate last year recorded its lowest level since the financial crisis after Lehman Brothers’ collapse. The prospects for this year are also being repeatedly revised downward.

For the past few years, advanced economies have been suffering from deflationary pressure caused by a chronic lack of demand. With the deceleration of emerging economies now overlapping this situation, global demand has slumped significantly.

The greatest concern is the contraction of the global economy.

The amount of trade worldwide has entered a downturn since the second half of 2014, declining by almost 20 percent. This is a decline that had not been seen since the time of the financial crisis after Lehman Brothers’ collapse. China’s import figures decreased by 14 percent last year and have shrunk a further 12 percent in 2016. There is a risk of a prolonged slowdown in demand.

Simply taking a pessimistic view of the current situation will not resolve these problems. The fact that as Presidency I allocated the greatest amount of time at this Summit to discussing economic issues was not for us to take a pessimistic view.

However, we must objectively and accurately recognize the risks that are there at present. Without sharing a common recognition of the risks, we will be unable to join hands to resolve issues.

Should we err in our responses here, we face a major risk of the global economy exceeding the normal economic cycle and falling into crisis. We the G7 leaders shared such recognition, as well as a strong sense of crisis.

In addition, with weaknesses seen in emerging economies, now is the time for the G7 to fulfill its responsibilities in that regard. The G7 will coordinate and will advance monetary policy, fiscal policy, and structural policy, and will launch our “three arrows.” Abenomics will be deployed globally.

We will expand to the world free and fair economic spheres through the Trans-Pacific Partnership (TPP) Agreement and the Japan-EU EPA. Creating environments in which all people, notably women, are able to be actively engaged, as well as advancing global health, including responses to public health emergencies, will be the foundation for sustainable global growth. In order to support the growth of emerging economies and boost global demand, under our common Principles, it is also necessary to promote quality infrastructure investment. These commitments by the G7 have been compiled as the “G7 Ise-Shima Economic Initiative.”

Japan, as the Presidency of the G7, will also act in accordance with the G7 agreements decided at this Summit and will take the lead in contributing to the growth of the world economy. In order to face up to the risk of the global economy becoming caught in a crisis, I am determined to mobilize all measures of policies and to once more rev up the engine of Abenomics to the greatest possible extent. I intend to examine what Japan should do, including whether or not we should raise the consumption tax rate, and clearly lay that out before the House of Councillors election this summer.

We will protect peace and stability of the world. This too is a major role for us G7, who share fundamental values.

Violent extremism is a challenge towards all humankind. We will eradicate places to which terrorists can flee while wiping out the inflow of terrorist financing. The G7’s new Action Plan is a major step towards the international community acting in coordination to fight terrorism. With regard to the issue of massive numbers of refugees flocking to Europe as well, we agreed to strengthen global assistance in order to sever the root causes of the issue.

All disputes must be resolved peacefully and diplomatically based on international law, not through the use of force or coercion. The G7 firmly share this principle.

Freedom of the seas must be ensured anywhere around the world. We must pursue juridical procedures and other peaceful means, never tolerating unilateral actions. And, we were in complete agreement in calling for full implementation regarding such matters.

We are also united in our conviction that the conflict in Ukraine can only be solved by peaceful and diplomatic means and in full respect for international law. The G7 urges all sides to take concrete steps that will lead to the peaceful resolution of the situation, in accordance with the Minsk agreements.

We call on Russia to play a constructive role regarding the full range of issues confronting the international community. It is important to maintain dialogue with President Putin in order to attain peace and stability in the situation in Syria and in other regions.

We the G7 condemn in the strongest terms North Korea’s nuclear test in January and its multiple ballistic missile launches. We demand that North Korea immediately and fully comply with all relevant UN Security Council resolutions and strongly urge North Korea to immediately address the international community’s concerns, including the abductions issue.

We seek a world free of nuclear weapons. We reaffirmed the G7’s strong determination towards non-proliferation and disarmament.

Bringing about a world free of nuclear weapons will not be easy. We nevertheless share the strong will to move forward hand in hand.

After this I plan to visit the atomic bombing site of Hiroshima together with U.S. President Obama.

We will go to the site of the bombing and pay tribute to all the victims. We will also send out to the world the message of the realities of atomic bombings.

I am convinced that this will provide significant momentum for the creation of a world free of nuclear weapons. Such a tragic experience should never be repeated anywhere in the world. This is a tremendous responsibility for us in the generation alive at this moment.

We will create a better world for our children, our grandchildren, and the children of generations still to come. At this G7 Ise-Shima Summit, the leaders of the G7 confirmed our determination in that regard and I believe it was a highly substantive Summit that will serve as a major impetus for translating into clear actions.

Last but not least, I would like to extend my sincere thanks to the local people of Ise-Shima and of Mie Prefecture for their considerable cooperation as we held this Summit.

With that, I conclude my opening statement.