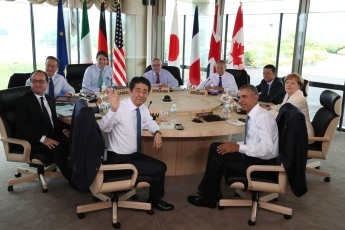 The G7 Ise-Shima Summit, chaired by Mr. Shinzo Abe, Prime Minister of Japan, took place on May 26-27. The overview of the meeting is as follows. This was the first time Japan hosted the G7 Summit in eight years since the Hokkaido-Toyako Summit in 2008.

, including the G7 Ise-Shima Economic Initiative was released. The following Annexes to the Declaration were also released.

The G7 leaders agreed to jointly take a leading role in international efforts to address pressing issues, such as downside risk for the global economy and challenges to the international order through unilateral actions, as a group guided by common values and principles, including freedom, democracy, the rule of law and respect for human rights.

(A) Overview
The G7 leaders discussed policy responses in order to swiftly achieve a strong, sustainable and balanced growth pattern in light of current global economic conditions with growing uncertainty.

The G7 leaders committed to reinforce their efforts to address the current economic situation in order to avoid falling into another crisis. While reaffirming the important role of fiscal, monetary and structural policies, the three-pronged approach, G7 leaders concurred on 1) strengthening economic policy responses in a cooperative manner, 2) using all policy tools – monetary, fiscal and structural – individually and collectively to strengthen global demand and address supply constraints, especially on the importance of strengthening efforts in a cooperative manner to implement fiscal strategies flexibly as well as to advance structural reforms decisively.

Prime Minister Abe stated that Japan, as G7 Presidency of this year, has decided to implement quality infrastructure investments totaling around 200 billion dollars over the next five years not only in Asia but also worldwide.

2. Women
The G7 leaders endorsed the G7 Guiding Principles for Building the Capacity of Women and Girls and the Women's Initiative in Developing STEM Career (WINDS) based on an understanding of the importance of capacity building for women and promoting engagement of women in STEM fields (Science, Technology, Engineering, and Mathematics) as the basis for the empowerment of women.

3. Cyber
The G7 leaders agreed to take decisive actions against cyber attacks and confirmed the importance of promoting the “rule of law” in cyberspace and encouraging the digital economy. They endorsed the G7 Principles and Actions on Cyber, established a new G7 working group, and agreed to strengthen G7 cooperation on cyber security.

4. Anti-corruption Measures
Corruption fundamentally runs contrary to the G7’s common values such as the rule of law, democracy, and fair competition, and the G7 leaders affirmed that our action to fight corruption is critical for economic growth, sustainable development and maintaining peace and security. The leaders endorsed the G7 Action to Fight Corruption in order to lead by example in promoting the importance of anti-corruption measures worldwide.

(D) Tax and Transparency
The G7 leaders agreed on the necessity of taking strict actions in cases of overseas asset holdings involved in tax evasion, money laundering, and other improper fund movements. They confirmed the importance of expanding participant countries in the Base Erosion and Profit Shifting (BEPS) Project, automatic exchanges of bank account information, and enhanced transparency related to beneficial ownership of corporations and other entities.

The G7 leaders reconfirmed the importance of free trade and their commitment to fight against protectionism. They confirmed to strengthen the multilateral trading system centered on the WTO and actively promote plurilateral negotiations within the WTO specific areas.

G7 leaders welcomed the signing of the Trans-Pacific Partnership (TPP) Agreement and expressed support for efforts by various countries to achieve early entry into force. They also confirmed to boost mega-Free Trade Agreements (FTAs), including the Japan-EU Economic Partnership Agreement (EPA) aimed for an agreement in principle as early as possible timing in 2016.

The G7 leaders stressed the benefits of free trade for development and agreed to promote trade liberalization in developing countries.

The G7 leaders agreed on the importance of short-term efforts, such as border measures, as well as longer-term efforts to promote tolerance and dialogues as a way to counter the violent extremism which is the root cause for terrorism. They also agreed on the importance of leading international initiatives by utilizing the strengths of each G7 country in a complementary manner that creates synergies. They endorsed the G7 Action Plan on Countering Terrorism and Violent Extremism to take the lead in international efforts to counter terrorism.

The G7 leaders expressed unity and solidarity with Europe as it confronts a massive inflow of refugees. They agreed on the importance of short-term humanitarian assistance and efforts to address the root causes.

Prime Minister Abe explained that Japan plans to give assistance totaling 6 billion dollars, including training to roughly 20,000 people, over three years in the Middle East as a new commitment to assist in stabilization of the Middle East as part of dealing with the refugee crisis.

The G7 leaders confirmed their intent to closely cooperate in finding a comprehensive solution to the various problems related to North Korea, including abductions, nuclear weapons, and missiles.

The G7 leaders confirmed their intent to call for full implementation of the Minsk agreements by all related parties and encourage Ukraine to conduct comprehensive domestic reforms, and to support Ukraine’s reform efforts.

The G7 leaders reaffirmed the importance of claims based on international law, not using force or coercion in trying to drive their claims, and seeking to settle disputes by peaceful means such as through juridical procedures, including arbitration. They expressed concern about situations in the East China Sea and South China Sea and endorsed the G7 Foreign Ministers’ Statement on Maritime Security.

The G7 leaders confirmed their determination to take the lead in efforts toward early entry into force of the Paris Agreement and its effective implementation, while leveraging the momentum of the agreement in the COP21. They also shared a recognition on the importance of encouraging proactive efforts from the major emitters in order to advance effective reduction of emissions.

Based on an understanding that energy security continues to be a pressing issue for the international community, the G7 leaders agreed to 1) promote investments in upstream developments, quality infrastructure, and clean energy technology, 2) take actions toward improving security in the natural gas market, and 3) promote energy technology innovations and enhancement of energy efficiency.

4. Overview of the Outreach Meeting

Since the Ise-Shima Summit is the first G7 Summit held in Asia in eight years, the G7 leaders together with outreach participants discussed quality infrastructure investment and open and stable seas under the theme of “Asian stability and prosperity.” Additionally, as the first G7 Summit Meeting since the adoption of the “2030 Agenda for Sustainable Development (2030 Agenda),” it also focused on health and active engagement of women and discussed promotion of Sustainable Development Goals (SDGs) and development in Africa.

(1) Stability and Prosperity in Asia

The G7 leaders and outreach participants agreed on the importance of claims based on international law, not using force or coercion to drive their claims, and seeking to settle disputes by peaceful means in order to secure open and stable seas.

On health, outreach participants agreed on the importance of strengthening the international community’s capabilities to respond to public health emergencies including infectious diseases, promoting universal health coverage (UHC) that plays a key role in dealing with a wide range of health challenges and enhanced support for AMR. The G7 Summit released the G7 Ise-Shima Vision for Global Health in these areas.

Prime Minister Abe announced that Japan, as the G7 Presidency, has decided to provide assistance totaling around 1.1 billion dollars aimed at enhancing response to public health emergencies including infectious diseases as well as strengthening health systems toward achieving UHC.

The G7 leaders and outreach participants agreed that promoting empowerment of women and gender equality is essential to the realization of sustainable growth. From this perspective, outreach participants expressed support for the G7 Guiding Principles for Building the Capacity of Women and Girls and the Women's Initiative in Developing STEM Career (WINDS).

The G7 leaders and outreach participants agreed to support the realization of an integrated, prosperous, and peaceful Africa by taking initiatives to deal with security and climate change in addition to health and women. Outreach participants expressed expectations for the 6th Tokyo International Conference on African Development (TICAD VI) taking place in Kenya in August 2016 in this context.

Prime Minister Renzi stated that the next G7 Summit Meeting will take place in Italy (Sicily), and was welcomed by the G7 leaders.