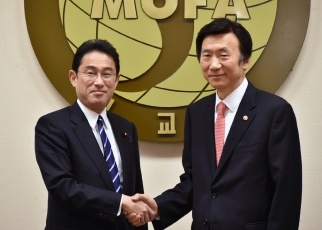 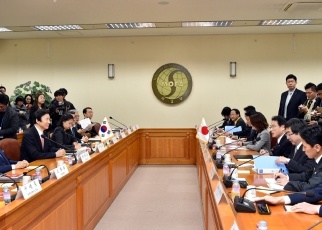 On November 1, commencing at around 10:35 a.m. (local time) for approximately 50 minutes, Mr. Fumio Kishida, Minister for Foreign Affairs of Japan, held a Japan-ROK Foreign Ministers' Meeting with Mr. Yun Byung-se, Minister of Foreign Affairs of the Republic of Korea (ROK), during his visit to Seoul in order to attend the Japan-China-ROK Trilateral Summit Meeting. The overview is as follows. (From the Japanese side, Mr. Kimihiro Ishikane, Director-General, Asian and Oceanian Affairs Bureau, and others attended the meeting; From the ROK side, Mr. Lee Sang-deok, Director-General, Northeast Asian Affairs Bureau, and others attended the meeting).

1 This was the ninth Japan-ROK Foreign Ministers' Meeting since Minister Kishida was appointed. Following on the last meeting in New York in September, a candid discussion took place in a constructive atmosphere, towards the deepening of the Japan-ROK relationship.

2 At the beginning, Minister Yun expressed his delight at being able to meet Minister Kishida again, by using the important occasion of the Japan-China-ROK Trilateral Summit Meeting. He explained the intention to work closely together in order to further develop the relationship between the two countries on the basis of a relationship of trust that he has developed by frequent communication with Minister Kishida.  He also noted that he is glad with the fact that the Japan-China-ROK Trilateral Summit Meeting is taking place for the first time in approximately three and a half years, and will serve as an opportunity to hold a Japan-ROK Summit Meeting.
In response, Minister Kishida said that based on the relationship of trust with Minister Yun, he intends to make efforts with Minister Yun to improve the relationship between the two countries. He welcomed the holding of Japan-China-ROK Trilateral Summit Meeting for the first time in around three and a half years, and appreciated the ROK's leadership as a chair country.
The two foreign ministers exchanged views on the way of proceeding the Japan-ROK Summit Meeting on the following day (November 2), shared the view that it is important to make the Summit Meeting a positive step which leads to the deepening of Japan-ROK relations in the future, and confirmed that they will continue to work closely together on preparations to ensure the success at the Summit Meeting.

3 In addition, the two foreign ministers also exchanged views on various issues between Japan and the ROK, and Minister Kishida raised the trial over the ''requisitioned civilians'' from the Korean peninsula, the tightening of regulations on Japanese marine product imports, the issue surrounding the indictment of the Sankei Shimbun's former Seoul bureau chief, and the Takeshima dispute. Minister Yun brought up the comfort women issue. They confirmed that discussions on various issues between Japan and the ROK will continue, on the various occasions including Director General level consultations.

4 Furthermore, the two foreign ministers shared the view that Japan and the ROK would continue to cooperate closely for the success of the Japan-China-ROK Trilateral Summit Meeting being held from the afternoon of the same day (November 1).