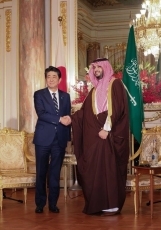 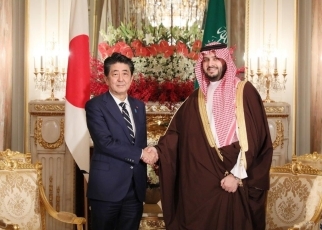 On October 21, commencing at around 7:10 p.m. for approximately 15 minutes, Mr. Shinzo Abe, Prime Minister of Japan, held a bilateral meeting with H.R.H. Prince Turki bin Mohamed bin Fahd bin Abdulaziz Al Saud, Minister of State, Member of the Cabinet of the Kingdom of Saudi Arabia. The overview of the meeting is as follows. The meeting was attended by Mr. OKADA Naoki, Deputy Chief Cabinet Secretary and others on the Japanese side, and by H.E. Nayef Al-Fahadi, Ambassador of Kingdom of Saudi Arabia to Japan, H.E. Hamad Al-Sulyem, Director General, Head of State Minister's Office, and others on the Kingdom of Saudi Arabia’s side.

2. Concerning the attacks on the oil facilities in Saudi Arabia on September 14th, Prime Minister Abe stated that Japan stands with the government and people of Saudi Arabia and strongly denounced the attacks. Both sides agreed on closely cooperating with each other for easing tensions and stabilizing the situation in the Middle East.

4. Both sides also discussed the situation on North Korea. Prime Minister Abe requested understanding and cooperation towards the early resolution of the abductions issue. In response, State Minister Turki expressed his support for Japan’s position.