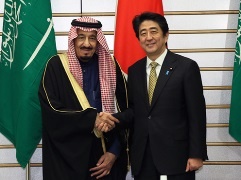 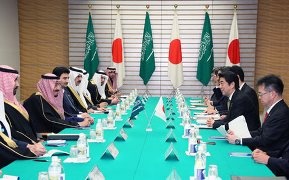 His Excellency Mr. Shinzo Abe, Prime Minister of Japan, held a meeting with His Royal Highness Prince Salman bin Abdulaziz Al Saud, Crown Prince of the Kingdom of Saudi Arabia, who was visiting Japan as official guest of the Government of Japan, for about 30 minutes from 6:05 p.m. on February 19 (Wednesday). After the meeting, the two leaders attended a ceremony for the signing of documents including the Memorandum on Cooperation between the Saudi Arabian General Investment Authority (SAGIA) and the Japan Cooperation Center for the Middle East (JCCME). Later, Prime Minister Abe hosted a dinner for the Crown Prince. An outline of the talks follows:

Prime Minister Abe expressed his gratitude to Crown Prince Salman for the warm welcome he received when he visited Saudi Arabia last year and noted that he was happy to have a chance to receive the Crown Prince in Japan and hold talks. He added that Japan wants to further strengthen the "Comprehensive Partnership" between the two countries in a wide range of fields. Crown Prince Salman told Prime Minister Abe that he hopes to deepen cooperation with Japan in various fields, saying he was pleased to visit Japan, a Saudi friend.

Prime Minister Abe said that under Japan's policy of promoting proactive contribution to peace based on international cooperation, the country will contribute more actively than ever to the peace and stability of international society, including the Middle East. In order to deepen its cooperation with Saudi Arabia, a major power in the Middle East and the linchpin for the region's peace and stability, Japan will promote dialogue in the security area and exchanges between defense authorities as well as starting dialogue between the National Security Councils of the two countries, he said. Prime Minister Abe also said Japan will advance exchanges between young Japanese and Saudi diplomats and dialogue between intellectuals in the diplomatic field. In response, Crown Prince Salman agreed with Prime Minister Abe, saying that exchanges and mutual visits between the two countries' young diplomats, intellectuals and business people are indispensable to Japan and Saudi Arabia. He also expressed hope that Japan will play an active role in the international community.

Appreciating Saudi Arabia's stable supply of oil to Japan, Prime Minister Abe expressed hope that the country will contribute to the stability of oil market. He also voiced appreciation for the progress made in energy cooperation between the two countries, including through the dispatch to Saudi Arabia of Japanese experts on energy efficiency. Crown Prince Salman promised a continuing stable supply of oil to Japan. The two leaders also agreed on cooperation on the peaceful use of nuclear power.

Regarding Saudi restrictions on imports of food produced in Japan, Prime Minister Abe expressed hope for their relaxation or abolition. Crown Prince Salman replied that his country will hold discussions of experts on the matter.

Prime Minister Abe said Japan hopes to boost cooperation with Saudi Arabia in the areas of infrastructure, the diversification of industry, human resources development and investment promotion. He also asked for the smooth issuance of Saudi entry visas to Japanese nationals.

The two leaders exchanged views on the situation in the Middle East and Asia, as well as on various issues concerning international society.