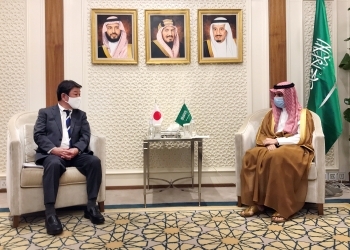 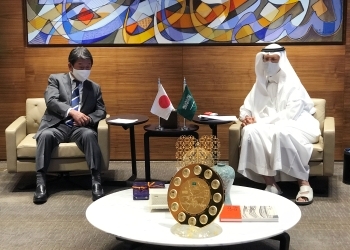 On October 3, commencing at 01:00 p.m. (local time; 07:00 p.m. JST) for approximately 75 minutes, Mr. MOTEGI Toshimitsu, Minister for Foreign Affairs of Japan, who was visiting Riyadh in the Kingdom of Saudi Arabia, held a meeting and working lunch with H.H. Prince Faisal bin Farhan Al-Saud, Minister of Foreign Affairs of Saudi Arabia. The overview of the meeting is as follows.

(1)At the outset, Minister Motegi offered his congratulations on Saudi Arabia celebrating the 90th anniversary of its National Day on September 23, and expressed his appreciation to Saudi Arabia for accepting his visit despite stringent measures being taken to prevent the spread of the novel coronavirus disease (COVID-19) and this day being a holiday. In response, Minister Faisal expressed his pleasure at extending a special welcome to Minister Motegi, stating that this was a testament to the priority Saudi Arabia places on Japan.

(2)Minister Motegi stated that Saudi Arabia's reforms toward overcoming dependency on oil and industrial diversification are becoming increasingly important amid the decline in oil prices and the COVID-19 outbreak, and that Japan's stance of supporting those reforms through the public and private sectors under the framework of the Saudi-Japan Vision 2030 is unwavering. In response, Minister Faisal stated that Saudi Arabia will press forward with the reforms, noting on the importance of working with Japan. The Ministers shared the view on continuing to further strengthen the strategic partnership between the two countries in a wide range of areas.

(3)Minister Motegi stated that Japan appreciates Saudi Arabia's efforts as the G20 presidency and will spare no effort in cooperating for the success of the Riyadh Summit. In response, Minister Faisal expressed his gratitude to Japan for its significant cooperation on the G20 process. The Ministers affirmed to work together for a successful G20 Riyadh Summit in November.

(4)Minister Motegi conveyed that Japan's policy to make proactive diplomatic efforts for easing tensions in the Middle East and stabilizing the situation is unfaltering even under the Suga Cabinet. In response, Minister Faisal expressed his appreciation to Japan's diplomatic efforts. The Ministers exchanged views regarding the situation of the Middle East including Iran and the Middle East Peace Process, and shared the view that Japan and Saudi Arabia will continue cooperating toward the peace and stability of the Middle East.
The Ministers also discussed the situation of East Asia including the East China Sea, the South China Sea and the situation regarding North Korea. In this context, Minister Motegi asked for understanding and cooperation toward the early resolution of the abductions issue and obtained the support of Minister Faisal.

(1)Minister Motegi expressed his gratitude at Saudi Arabia's steady oil supply to Japan. He also stated that Saudi Arabia's reforms toward overcoming dependency on oil and industrial diversification are becoming increasingly important amid the COVID-19 outbreak, and that Japan's stance of supporting those reforms, including energy sector, through the public and private sectors under the framework of the Saudi-Japan Vision 2030 remains unchanged. Minister Motegi also stated that Japan highly appreciates the agreement on supporting for circulating carbon economy and strengthening energy system made by Minister Abdulaziz's leadership as the chairman at the recent G20 Energy Ministerial Meeting.

(2)In response, Minister Abdulaziz stated that the cooperation with Japan on the basis of energy area is significant and Saudi Arabia reaffirms their commitment on its steady oil supply. Minister Abdulaziz expressed his gratitude to Japan for its cooperation on the G20 process. The Ministers affirmed to work together for a successful G20 Riyadh Summit in November and for further strengthening bilateral relations in energy sector.