Top > Countries & Regions > Middle East > Speech by H.E. Taro Kono, Minister for Foreign Affairs of Japan At the Closing Session on the First Day of the 18th Doha Forum

Speech by H.E. Taro Kono,
Minister for Foreign Affairs of Japan
At the Closing Session on the First Day of the 18th Doha Forum 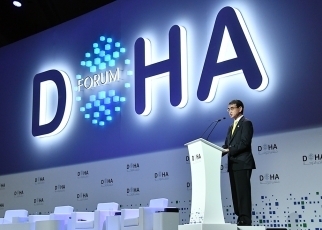 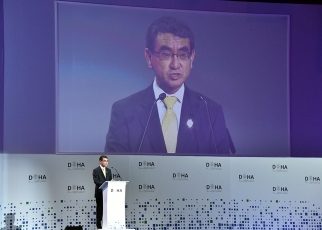 Good afternoon. It is indeed my honor to have a chance to deliver the closing remarks for the first day of the Doha Forum 2018. I’m very pleased to be here at this important gathering of global decision makers, thanks to the warm invitation by H. E. Sheikh Mohammed bin Abdulrahman Al Thani, Deputy Prime Minister and Foreign Minister of the State of Qatar.

The main theme of this Forum, “Shaping Policy in an Interconnected World,” focuses on a number of major issues that require the urgent attention of global leaders. I really appreciate the efforts by the Qatari government and its partners to draw the world’s attention to these important topics. It is certain that improvement in the connectivity or interconnectedness of the world has brought us massive benefits in the past decades. Particularly the rapid progress in information and communication technologies has given us increasing opportunities of access to outside world.

Japan is trying to make use of such advanced technologies for the stability and security of the Middle East. For instance, Japan decided to upgrade its decade-long project to support Middle Eastern Peace Process called “Jericho Agro-Industrial Park (JAIP)”, especially in ICT sector. This project is expected to facilitate Palestine’s connectivity with the rest of the world.
But at the same time, such improvements have created new challenges as well, such as threats in cyberspace or the increased use of communication technologies for the purposes of promoting terrorism or violent extremism. Naturally, the new challenges require new policies and actions that can establish or re-establish order in new circumstances. Japan has been making efforts to adjust its policies to new and emerging circumstances, and started taking actions to implement them in several fields. I would like to briefly outline a few of these efforts.

In the field of maritime order, Japan has been promoting the vision for a “Free and Open Indo-Pacific.” Under this vision, Japan is promoting the fundamental principles such as rule of law, freedom of navigation and free trade. In addition, we are pursuing economic prosperity, through enhancing quality infrastructure projects in accordance with international standards, and implementing initiatives for ensuring peace and stability. These include enhanced maritime law enforcement capabilities, anti-piracy measures and disaster risk reduction.

Also, in the field of cyber security, Japan is vigorously moving forward with our cyber diplomacy to realize a free, fair and secure cyberspace. It consists of three pillars:
First, Japan promotes the rule of law in cyberspace. Existing international law should be applied to cyberspace, and Japan will take the initiative in implementing international rules and norms in various fora including the UN. The second pillar is the development of Confidence Building Measures (CBMs). Activities in cyberspace have a high anonymity, and can cross national borders instantly. In order to prevent contingencies that are caused by activities in cyberspace, it is essential to deepen and share understanding of each country’s legislations, systems, policies, strategies, and ideas and increase our mutual confidence. Based on such idea, Japan is engaging in bilateral and multilateral dialogues on cyber with fourteen countries and regions including the U.S., Australia, EU, Russia, and ASEAN. I hope that we could have such dialogues with the Middle Eastern countries in the near future.  The third pillar is cooperation on capacity building. For example, Japan collaborated with the U.S. to conduct a joint exercise with ASEAN countries on cyber-security for control systems. I hope to see the collaboration in the field of capacity building also with the countries in the region in the future.

Japan is trying hard to be an honest facilitator of dialogue to help bring about peace and stability in the Middle Eastern region under “Kono Four Principles”. As described in the concept note for Doha Forum 2018, under the current shifts in power dynamics, peace and mediation have become more complex as a task. But, Japan is determined to play a more active role in international efforts to promote peace and security, by promoting and facilitating dialogues in the Middle East. Japan will make use of its unique position that is impartial among ethnicities, religions or religious schools in the Middle East, and has left no negative footprints in its diplomatic history with this region.

I hope this Forum will be closed tomorrow with a great success in introducing ideas and concepts that would help the world address emerging, common challenges towards a better future of mankind.

Thank you very much for your attention.