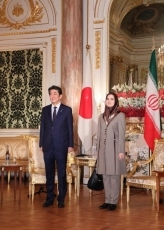 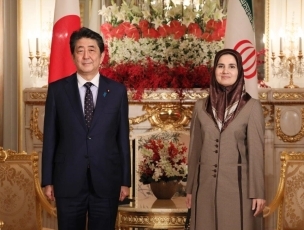 On October 24, commencing at around 5:45 p.m. for approximately 15 minutes, Mr. Shinzo Abe, Prime Minister of Japan, received a courtesy call from H.E. Dr. Laya Joneydi, Vice-President for Legal Affairs of the Islamic Republic of Iran, who is visiting Japan. The overview of the courtesy call is as follows.

1. Prime Minister Abe welcomed Vice-President Joneydi’s first visit to Japan and expressed pleasure at the two countries having communicated with each other actively at a high level. In response, Vice-President Joneydi stated that she was honored to attend the Ceremony of the Enthronement of His Majesty the Emperor, and appreciated the continued communication between the two countries at a high level.

2. Amid the escalation of tensions in the Middle East, the two sides exchanged views toward easing tensions and stabilizing the situation in the region. In this context, Prime Minister Abe stated that Japan will continue to make persistent diplomatic efforts. In response, Vice-President Joneydi welcome the diplomatic efforts by Japan.

3. In addition, the two sides exchanged views on North Korea issues. Prime Minister Abe requested understanding and cooperation on the early resolution of the abductions issue. In response, Vice-President Joneydi stated Iran will provide Japan with as much support as possible.